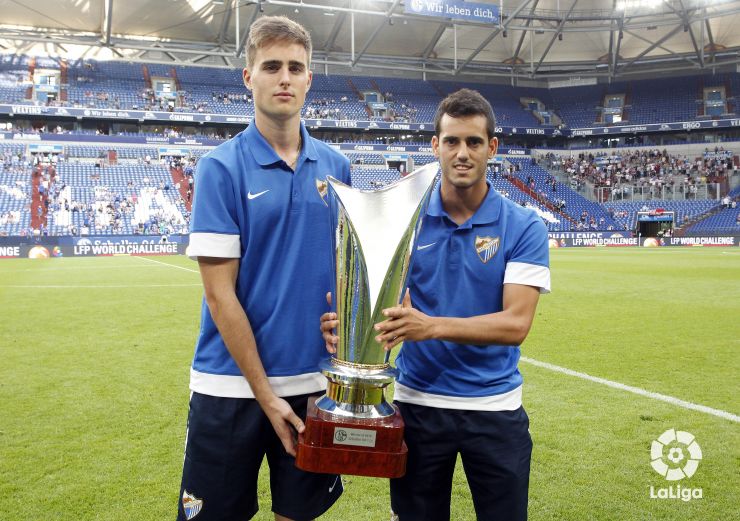 The Andalusian side won both of their matches in Germany, leaving further proof of the competitiveness and quality of the Spanish league.

The LFP World Challenge Tour has been a complete success for Málaga CF in Germany. The Andalusian side lifted the trophy in the Veltins Arena after beating Newcastle United FC (3-1) and West Ham United FC (2-0) and demonstrating the quality and current standard in the Spanish league.

"This tour has been positive. We have had a chance to compete with quality teams and had some wonderful experiences", stated the team’s coach, Javi Gracia, after his side collected the Schalke Cup 2014 on their LFP World Challenge Tour, which is organised by the Liga de Fútbol Profesional.

After their trip to Australia as part of the LFP project, Málaga CF comfortably beat two big Premier League teams and entertained the 40,000 who turned out at the stadium and showed their enthusiasm for the arrival of the LFP World Challenge in Germany.

In addition, some promising performances from the team’s youngest members, such as Sergi Darder, Juanmi Jiménez, Samuel Castillejo, who received the man of the match trophy, and Ezequiel Rescaldani, who took the player of the tournament award, gave an insight into the future of La Liga.

"We have a balanced squad in terms of age. I don’t want to pick anyone out at this tournament, but the youngest players did really well. It’s not easy to come from the reserves and they have adapted very well", said Gracia.

However, despite the victories and good form of the team from Malaga, the manager asked for caution and pointed out that the real excitement will come in the Spanish league, when the season gets underway.

"Preseason victories create excitement and confidence, it a bonus and motivation to keep working hard and preparing for the Spanish league", said the manager before embarking on the final stage of his preseason in Switzerland.