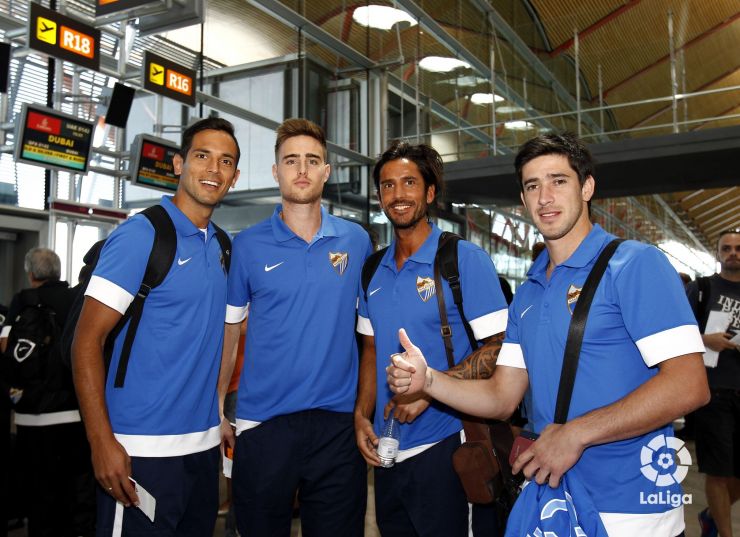 Málaga are now in Australia

The Andalusian club will play two matches in the area as part of the second LFP World Challenge Tour. Adelaide United and Perth Glory will be their opponents.

After the arrival of RC Deportivo de La Coruña in Colombia, Málaga CF touched down in Australia on Wednesday, where they will play Adelaide United FC, who are coached by Spanish manager Josep Gombau, on Friday 25 July and on Sunday 27 they will take on Perth Glory FC.

After a journey of more than 20 hours, with a stopover in Dubai, the Málaga players landed at Adelaide International Airport in the south of Australia, at 20:00, local time, and after greeting the fans who were there to welcome them, they got straight on a club bus to make their way to the Intercontinental Hotel, where they will stay before travelling to Perth on Saturday.

"It is a chance that the Liga de Fútbol Profesional has given us and the club is committed to helping raise awareness of the championship in other countries where football is not yet as popular. I think it is important. We got Australia and we are going to really enjoy all of this. It’s true that it is not normal for a Spanish team to travel to Oceania, so we’re going to try and enjoy the cities and play a couple of matches here and they will enjoy Spanish football", said midfielder Ignacio Camacho.

The first of those matches takes place on 25 July at 19:30 local time (12:00 in Spain), in the stunning Oval Stadium. The opponent will be Adelaide, whose manager, Josep Gombau, is assisted by ex-FC Barcelona player Guillermo Amor. On Sunday, at 15:00 in Australia (9:00 Spanish time), Málaga will bring their Australian venture to an end with a second match, this time against Perth Glory.