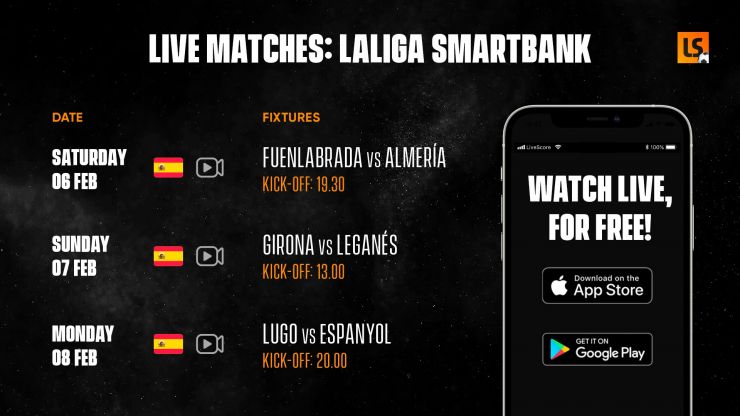 Three matches per gameweek will be streamed live and exclusively via the LiveScore™ app for the rest of the 2020/21 season. Tight race in Spain’s 2nd division sees top three separated by just 3 points in bid for automatic promotion to LaLiga Santander.

As Atlético Madrid continue to lead Barcelona and Real Madrid in the fight for the LaLiga Santander title, an equally tight contest is emerging at the top of Spain’s second division, LaLiga SmartBank, which can now be seen for free in the UK and Ireland via the LiveScore app.

For the remainder of the regular season, at least three specially selected LaLiga SmartBank matches per round will be exclusively streamed through LiveScore. As one of the world’s leading real-time sports updates and streaming service providers, LiveScore already has over 2 million users in the UK and Ireland. Users simply need to open the streaming function on the LiveScore app, which is downloadable from the app stores, and select the match in question to enjoy the action.

The innovative new agreement allows LiveScore app users to get closer to historic Spanish clubs including Real Zaragoza, Málaga, Girona and Espanyol de Barcelona directly from their iOS and Android mobile devices. LaLiga SmartBank also hosts some of the country’s hottest rivalries such as the Asturian derby between Real Oviedo and Real Sporting, as well as Spain’s most prominent island teams UD Las Palmas, RCD Mallorca and CD Tenerife.

RCD Mallorca currently sit top of LaLiga SmartBank and hold a slender lead over RCD Espanyol and UD Almería in the quest for automatic promotion to LaLiga Santander. Rayo Vallecano, CD Leganés and Real Sporting occupy the remaining playoff positions. Beneath that, eight clubs are separated by just five points, suggesting the race for promotion to Spain’s top division will go down to the wire.

Ric Leask, Marketing Director at LiveScore, said: “We are thrilled to be once again expanding our free-to-air live streaming service, this time bringing the passion and quality of Spanish football through the addition of LaLiga SmartBank. This is an exciting time for UK and Ireland football fans to follow the action as a number of household name teams battle it out for promotion back to LaLiga Santander.

As a global sponsor of LaLiga Santander, at LiveScore we already recognise the appeal and interest in Spanish football for our users, and we can’t wait to start bringing the very best of LaLiga SmartBank to these shores between now and June.”

Melcior Soler, director of LaLiga’s audiovisual department said: “This agreement provides a new and immersive way for fans to discover LaLiga SmartBank through an app that has become synonymous with live sport in the UK and Ireland. Digital platforms can help broaden the reach of our competitions and build lasting connections with the user. We are confident that LiveScore provides a viewing experience that people will want to repeat.”

Games selected for live streaming for Matchday 24 of LaLiga SmartBank are as follows (kick-off times GMT):