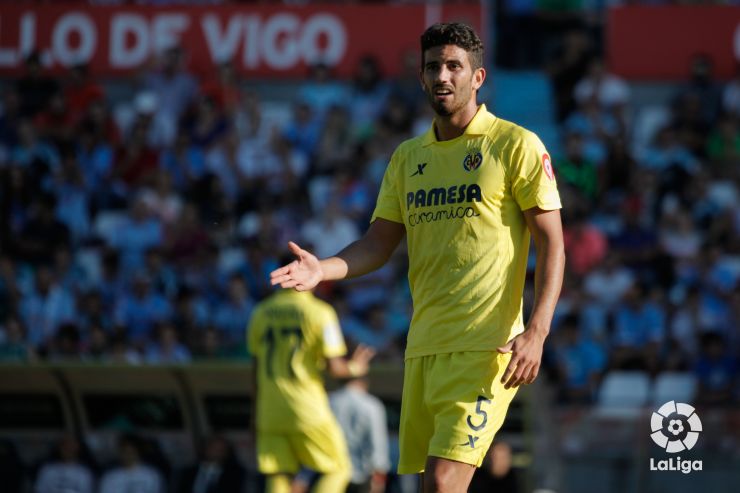 LFP.es stops off at Villarreal (II)

In this second instalment it is the turn of Mateo Musacchio, who is now in his fifth season with the squad: "This is my home; this is where I became a footballer".

The footballing evolution of Mateo Musacchio (Rosario, Argentina, 26 August 1990) goes hand in hand with his time at Villarreal CF. After his arrival in 2009 and a season with the second team, the expeditious Argentine centre-back has progressed to the extent that, since he came up to the first team in 2010, he has been a regular starter for every manager he has served under at the team from Castellon. Now, in one of the best spells of his career, he is enjoying a Villarreal who are fighting for three titles.

LFP.es: You’re young, but you’ve been here a long time. How would you describe your love affair with the club?
Musacchio: I’ve been here for a long time now, and I always say that I’m very comfortable and at ease. It’s my home, I grew up here and I became a footballer – if I may be so bold – at this club, so it’s a bit of all of that.

LFP.es: What do Villarreal have that allows a new player to quickly fit in as if they have been playing with the team for years?
Musacchio: They give you all the comforts and are involved in everything we need, you have the team, which is a solid unit and that makes things easy for the players. I think it is a side in which a lot of things come together, and that helps new players who are coming from other teams enormously.

"Villarreal is a top club in every sense"

LFP.es: Youth is one of the characteristics of this side, what does that bring to the unit and what does Villarreal bring to you as a group?
Musacchio: Everything. We bring a great desire to learn, to grow and, of course, to play and demonstrate that we can be at this club and fight for the Liga BBVA, and that is the most important thing. They treat us very well here, they make everything very easy; we really can’t complain. It is a top club in every sense.

LFP.es: Since then, it has been only good news, what is the limit for Villarreal?
Musacchio: I don’t know if you could call it a limit, but I think we are capable of much more. Last year we had a great season, after returning to the Liga BBVA, and I think we’re off to a good start this season. Hopefully we can keep it up throughout the campaign.

LFP.es: Marcelino is one of the keys to the growth of the team in recent years. Tell me about the Asturian coach.
Musacchio: He is very approachable; both he and the coaching staff are all very nice. They are uncomplicated and hard-working people. They are very demanding and pay attention to the details, which is reflected on the pitch every weekend.

LFP.es: Whether you win or lose, the brand of football you play is always attractive…
Musacchio: Yes, we always try and move forward with an organised attack. Sometimes we produce attractive moves, which is what people like to see. We try to attack as often as we can, and that is obviously something the crowd likes.

"The Liga BBVA is a very attractive championship which encourages attractive football. It is a great league, if not the best"

LFP.es: Several players have come and go, and there has been more than one change of manager, but you are a constant in the centre of the defence…

Musacchio: I’m happy and I’ve been at the club for a while now. It is true that a lot of coaches have been here, but I think the key is in the hard work, although you have to demonstrate it every weekend, Sunday after Sunday, and not even back off in training.

LFP.es: Rosario has produced some great players, Messi, yourself… Is there something in the water that creates good players?
Musacchio: Well… don’t compare me with Messi… There are some very good players in Rosario, although not just that part of the country, in the whole of Argentina in general. I think it has to do with the fact that you live football from a very young age. The first thing we do is kick a ball and because of that following, good players are produced.

LFP.es: There are a lot of very good Argentinians around the world. A few of them play in the Liga BBVA. What is your favourite thing about Spanish football?
Musacchio: It’s a very attractive championship where teams set out to play good football. There are a lot of good sides, with the best players in the world. It is a great league, if not the best.

LFP.es: You are particularly strong in the air. Which player is the most difficult to stop in that department?
Musacchio: I think there are a lot of players, from my point of view having to mark them, I think that Aritz Aduriz has one of the best jumps, and the best headers, so I think he is very good in that respect.

LFP.es: What is it about El Madrigal that makes it such a difficult stadium to visit?
Musacchio: It is a bit of everything. The people, the fact that we feel very comfortable playing at home in our ground… It is a combination of the fans and the confidence we have playing in El Madrigal.