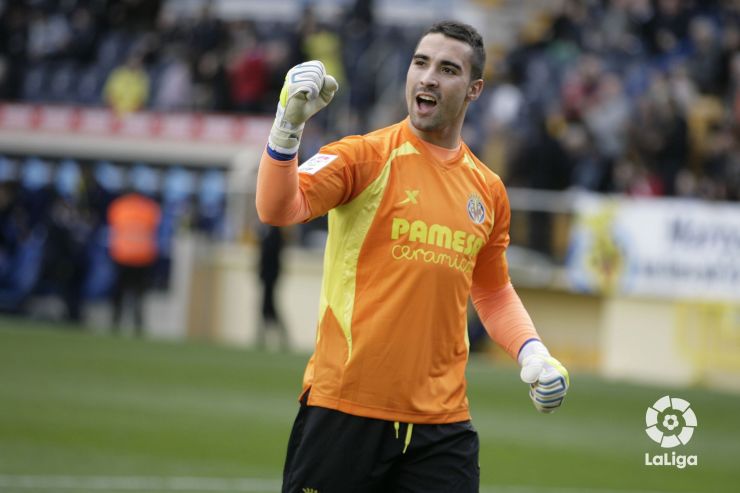 LFP.es stops off at Villarreal (I)

In this first instalment we talk to Sergio Asenjo. The ambitious keeper is in a confident mood: "Our squad is good enough to fight for everything".

Youth, reflexes and experience are the main strengths of our 25-year-old interviewee, who is now in his second season with Villarreal CF, the club with which he has a contract until 2019. His name is Sergio Asenjo. The Palencia-born keeper has pulled on the number-one shirt for some of the best teams in Spanish football. Asenjo spoke to LFP.es about his coming of age with the Yellows.

LFP.es: Your injury is now a thing of the past, Villarreal put their trust in you and you have repaid them with great performances and consistency…

Asenjo: I'm happy after last year, which was a year of transition for me. I arrived at a new club and was on loan, but I had the confidence of the coach from the start. The year was capped off with the transfer and the five year contract. The club has shown its confidence in me with such a long contract, so I will try and repay that confidence on the pitch.

LFP.es: You've found stability here, what has Villarreal given you?

Asenjo: Peace of mind and confidence. When a club believes in you from day one it is reflected in your performances. I came here intent on working hard and trying to win myself a place and I think I did that. Then, throughout the season, my play was more than acceptable, something the club was hoping for from me.

We are a small and hard-working club, and I think that could be the basis for the success

LFP.es: Is football more enjoyable when you’ve been through a hard time?

Asenjo: Yes, without a doubt. I went through it very young so I worked very hard to try and recover as soon as possible. With hard work and dedication you can achieve anything. In my case, I've just turned 25 and I think I have a Masters in football, so I'll try and go injury free from now on, so that from today people will see the best of Sergio Asenjo.

LFP.es: Seasons are often decided in the last few matches, but it is always important to start well, and Villarreal have done that…

Asenjo: We started well last year too, getting into the European spots and staying there nearly all season. This year we made it to the group stages of the Europa League, we started with a great win over Levante UD, in Ciutat de València, which is a tough ground. Then we made things difficult for Barcelona and finally got a point against Granada.

Asenjo: There are a lot of matches to go so I think it will be a different season to the last one. We have a squad that is capable for fighting for everything. We'll try to have a good year in the Liga BBVA, and to get as far as possible in the Europa League and the Copa del Rey.

LFP.es: Do you think the squad is prepared for all three competitions?

Asenjo: Yes, new and young people have joined, people with ambition and a desire to grow. The newcomers have been very good. I think we have a versatile squad with variation, so we’ll try to continue the dynamic from last year. We're a very small and hard-working club, and I think that could be the basis of success.

LFP.es: How does a small club fight with the big ones and play such great football?

Asenjo: It is one of this Villarreal team's calling cards. The boss tries to impart that on us in training. He says that we have to play this way and we respond really well. We’re developing an attracting brand of football that is also effective. Hopefully we can keep this standard of football up all season.

Asenjo: I'm working on it. All footballers fight for their dreams and my goal is to receive a call from the Spanish national team one day. I'm young, I still have a lot to fight for and a lot of work to do, and Villarreal is the ideal place to achieve it.