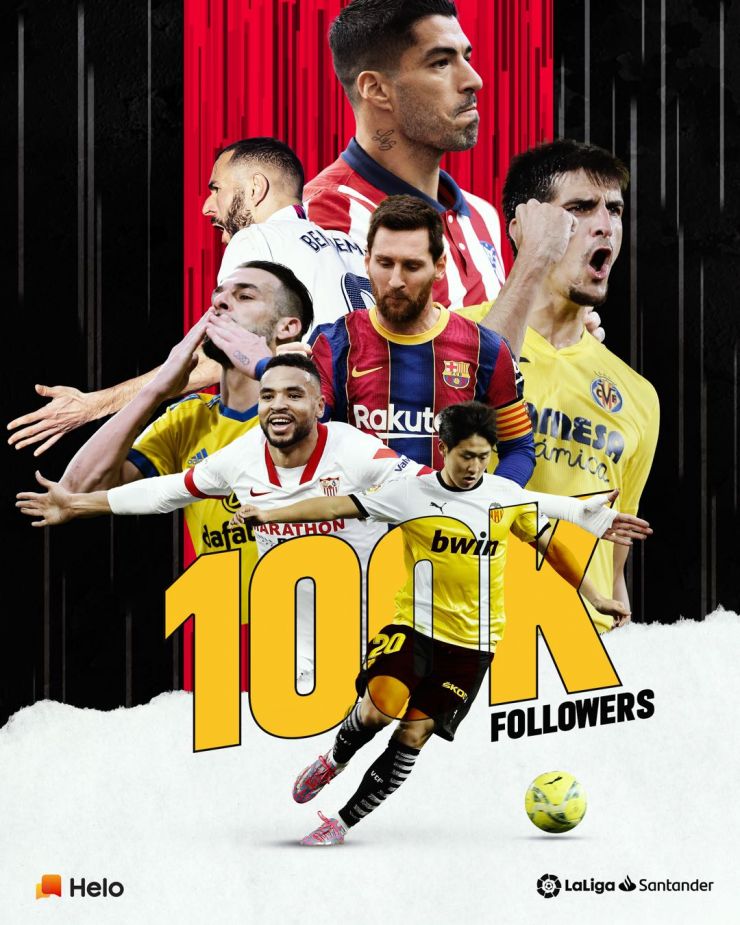 LaLiga today announced a partnership with Helo, a leading social media platform in Indonesia, for local football fans to share their passion for the game on the platform.

As part of the partnership, LaLiga will share the latest information about the league, highlights of the games, matchday statistics, videos, articles, official LaLiga matches photographs, and many more on its official Helo account. LaLiga will also be able to set up digital campaigns on Helo, for seasonal events such as ElClasico, derby matches, and local Indonesian festivals. The one-year partnership between LaLiga and Helo is the first such collaboration for a European football league and will enable LaLiga to reach the local football community through one of the fastest-growing social networks in Indonesia.

"We are pleased to work with LaLiga and hope Helo can become the go-to platform for anyone who loves football and LaLiga," said Indira Melik, Country Head of Operations, Helo Indonesia. "Although Helo is a relative newcomer in Indonesia, we're delighted to bring local celebrities and global partners to our platform, allowing our community to connect, communicate and interact with them. The LaLiga partnership is part of Helo's ongoing effort to enhance the user experience for our community and partners in Indonesia and we look forward to offering more amazing experiences of connecting and exploring communities or for fellow fans for other sports."

Having established its presence on Helo two months ago, La Liga currently has more than 100,000 followers, who share content in the form of short videos, photos, or expressions in status uploads.​

​“As a newcomer application, Helo is equipped with a number of features that answer all the needs of social media users in Indonesia,” said Alfredo Bermejo, LaLiga’s Head of Digital Strategy. “Fans in Indonesia will have a new channel to learn more about LaLiga and Spanish football clubs in general. Considering its feature, Helo will be also a great platform for them to interact with LaLiga.”​

​With the announcement of this agreement, LaLiga goes a step further with its digital strategy in Indonesia, where it already has a presence on various digital and social platforms of the country with a combined total of 4.7 million followers. Additionally, LaLiga has also carried out various campaigns that sparked passion for football and Spanish culture in the country. In recent seasons, LaLiga has collaborated with the iconic comic character, Si Juki, by producing a special edition of Si Juki's trip to Spain, releasing an Indonesian-Spanish dictionary with football terminologies as the main topic, a Christmas and New Year campaign centered in Yogyakarta, and the latest one is the ElClasico campaign which showcased the natural beauty of Mount Bromo. All of these activities were successfully amplified across LaLiga social media platforms in Indonesia.​

Globally, the passion for LaLiga is reflected in the massive fan following on its social networks where it has more than 130 million followers worldwide on its different platforms. LaLiga's 72 million followers on Facebook, LaLiga's official Instagram with more than 35 million followers, Twitter profiles in 8 languages, including Bahasa Indonesia, YouTube channel, specific social media networks for China or Russia, as well as Babe, Line and Helo for the Indonesian market; on top of the league’s presence on TikTok and Twitch. LaLiga publishes unique, daily content about its players and teams on its social networks in 15 languages, reaching the entire globe relevant content for each market.