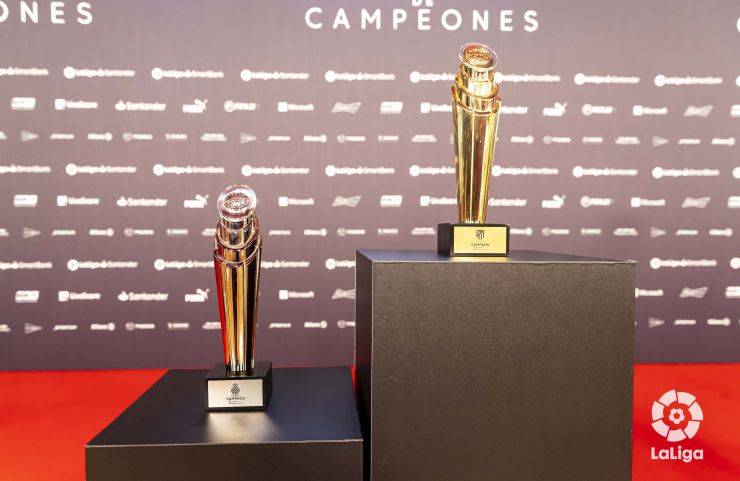 Atletico de Madrid and RCD Espanyol, champions of LaLiga Santander and LaLiga SmartBank, as well as the promoted clubs, were acknowledged at the Champions Gala

Madrid, 30 July 2021. On Friday evening LaLiga celebrated the first edition of the Champions Gala, an event to recognise the champions of the top two divisions of Spanish football and welcome the promoted clubs, as well as to announce some of the new initiatives and innovations that LaLiga will be launching in the coming LaLiga Santander and LaLiga SmartBank seasons.

The Atletico de Madrid captain, Koke Resurrecion, received the Gold Badge accrediting his team as champions of LaLiga Santander and which they will sport on their shirt next season, starting on Friday 13th August.

Meanwhile, Barcelona's RCD Espanyol were awarded the Silver Badge as champions of LaLiga SmartBank, which was presented to the club’s CEO, Jose Maria Duran and its sports director, Francisco Rufete.

The Champions Gala served to look back on last season, which was inevitably marked by the COVID-19 pandemic and the absence of fans in stadiums.

Through a video recorded especially for the occasion, Villarreal CF striker Gerard Moreno, Atletico de Madrid coach Diego Simeone, and referee Mateu Lahoz discussed the difficulties suffered throughout the campaign on a sporting level and how the experience has helped appreciate the value of fans in football that much more.

Some of the protagonists behind the cameras also explained the technical and broadcasting challenges they had to face in order to continue conveying the emotion and passion of our sport to the billions of fans who follow LaLiga on television in Spain and around the world, all without fans in the stadiums.

With sights then set on the 2021/22 season, some of the various new initiatives and innovations planned for the new LaLiga season were presened, followed by an analysis of the LaLiga Santander and LaLiga SmartBank schedule, which will as always feature the ElClasicos, derbies and the season run-in, which was more thrilling that ever last time out.

In audiovisual terms, the 2021/22 season will be remembered for two important international broadcaster agreements, in the shape of ESPN (owned by Disney+) in the United States and Canada; and MTV on the Indian subcontinent, demonstrating the competition's commitment to innovation and remaining at the cutting edge when it comes to offering top-class global entertainment.

The new season will also see the debut of English football legend Gary Lineker as a LaLiga commentator on the international channel.

In addition, next season will see the consolidation of projects such as LaLiga Casters, where well-known streamers, including Ibai Llanos (also present at the Champions Gala), will commentate on matches in a unique way in a bid to reach a different type of audience.

Finally, two very new and exciting entertainment projects will launch this year in a bid to offer LaLiga fans new experiences. Firstly, LaLiga TwentyNine's: LaLiga's new restaurant concept present in different locations around the world, the first of which will be at the PortAventura World theme park in Spain. The park will also host the second of these projects, The Beat Challenge: a digital experience to enjoy LaLiga even more, both inside and outside the popular theme park.

The Champions Gala, which took place at Madrid's Reina Sofia Museum and was hosted by Movistar+ presenters David Broncano and Susana Guasch, also featured a number of high profile representatives from the world of politics, culture, media and sport.

Current and former sports stars such as Carolina Marin, Iker Casillas and Emilio Butragueño were just some of the names who appeared on the red carpet.

The international music sensation Camilo also didn’t want to miss out, and sent a special message of support to LaLiga, wishing the league all the best for the new season ahead.