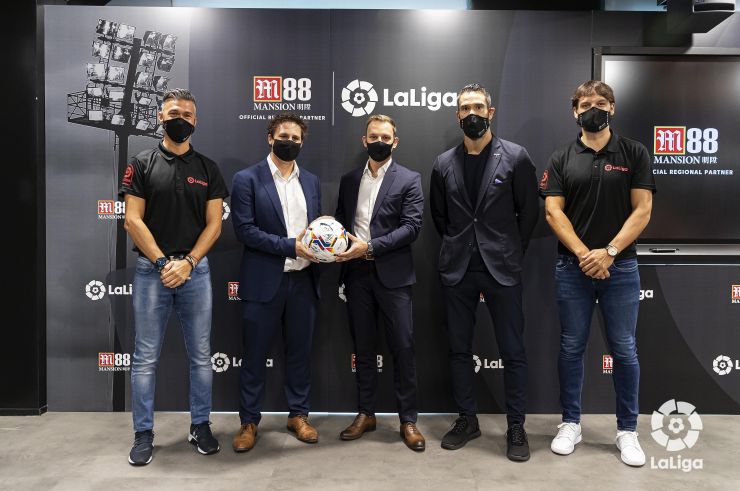 New partnership will bring fans closer to the action through exclusive content. At the official launch event for the partnership, LaLiga Ambassadors Luis Garcia and Fernando Morientes highlighted the growing profile of the competition in Asia.

LaLiga has reached an agreement for M88, a leading online betting platform, to become the league’s Official Regional Betting Partner in Asia until the end of the 2023/24 season.

At the official launch event for the partnership, both organisations outlined their commitment to the Asian market and to produce new content and competitions that will increase engagement amongst football fans and help the league continue to grow across the continent.

This expansion into the Asian market is of great importance for LaLiga and by setting up an exclusive content platform with M88, it can take the next step in bringing local fans closer to the action.

Speaking at the event, Oscar Mayo, LaLiga’s Head of Business, Marketing and International Development, said: “The love of football continues to spread rapidly in Asia and LaLiga’s following has grown incrementally for several years. This agreement with M88 gives us a new way to reach new audiences and show them a side to the competition they haven’t seen before.”

One such way that LaLiga will partner with M88 is to create a weekly video series, featuring LaLiga Ambassadors, which will keep fans in Asia up to date with the coming games and storylines in LaLiga Santander.

In addition, there will be more chances for fans to engage with LaLiga, with official merchandise, match tickets and other money-can’t-buy experiences all up for grabs.

M88 is clear that this relationship with LaLiga will be beneficial for both parties, with its members able to experience first-hand the growth of the league in Asia.

Carlos Lopez, Creative Director for M88 said: “We are incredibly excited to be partnering with LaLiga, an organisation with whom we share many values and aspirations. As the league continues to grow in popularity throughout Asia, we are eager to engage with LaLiga fans and bring our own members closer to the action.”

The event celebrating the new partnership between LaLiga and M88 also featured two LaLiga Ambassadors in Fernando Morientes and Luis Garcia, who both highlighted the importance of the league’s development in Asia.

Morientes said: “All the ambassadors have had the chance to travel a lot to Asia. We see that the interest is far bigger now and we have seen how such an interest has been slowly but gradually growing. We have been direct witnesses of this change and we have realised that LaLiga is becoming more and more important in that part of the world.”

Luis Garcia echoed Morientes’ comments, stating that the interest in LaLiga in Asia has played a part in more Asian players being represented in Spain’s top two divisions.

“When we travel there, we see that they know all teams – not just in LaLiga [Santander], also in LaLiga SmartBank – and all the players”, he said. “The knowledge of LaLiga and the knowledge of the football is growing. The best example is that, every year, more Asian players are arriving in LaLiga and that means that the football is growing and that’s because of the passion they have over there.”