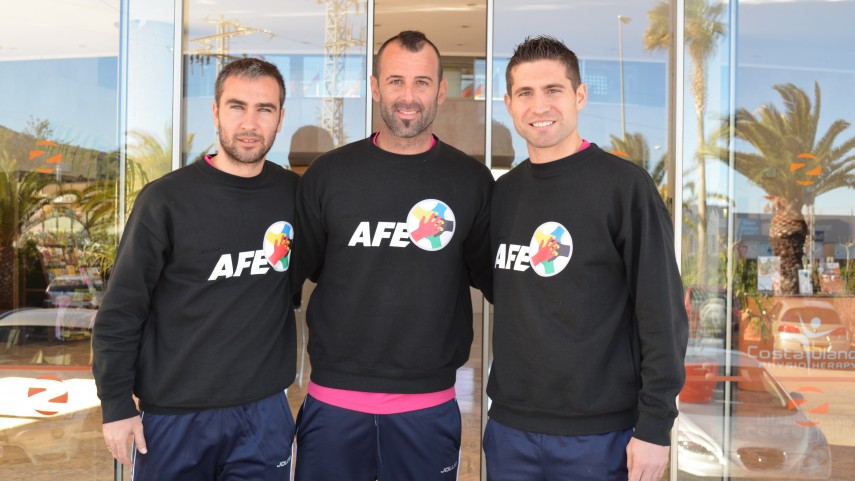 Toni Doblas, Xavi Moré and Ayoze Díaz spoke to the LFP.es about the Eighth Edition of the AFE Sessions for players without a team.

"It helps us feel like players again", said Toni Doblas, ex-keeper of Real Betis Balompié and Real Zaragoza, among others, of the Eighth Edition of the AFE Sessions for players without a team.

The 33-year-old goalkeeper is one of the 24 players to take part in the Asociación de Futbolistas Españoles' initiative, which with the support of the LFP, is taking place in Alfaz del Pi (Alicante) between the 16th and 31st of January. The purpose of the event is to help members who played in the Liga BBVA, the Liga Adelante or the Segunda División B, as well as some other overseas leagues, last season and are currently without a team.

"Here, from the first day, I have felt like I am in a professional football team, in a summer training camp for example, where you have everything", explained 31-year-old Catalonian player Xavi Moré, who was a right-winger with Real Oviedo. "Working on your own is not the same as working with a group of players who want what you do. Then there is playing matches, you get into a rhythm of playing matches against other teams and this initiative gives you that opportunity", added another participant, an Ayoze Díaz who has played for several Spanish clubs, including RC Deportivo de La Coruña and CD Tenerife.

Established in 2011, the event is now running its eighth editionand it has been very successful: of the 250 participants so far, 198 have found a team by the end of the sessions. "People are starting to see that this is a great initiative and that some really good players are coming. If things continue in that way I am sure a lot of teams will be waiting for the AFE sessions to sign new players", explained Toni Doblas to LFP.es. "Very good players come to the AFE, who for one reason or another are without a team and it is logical that with their experience they should find one", addedMoré.

With official LFP balls, kits, physical trainers, material and a press officer, among other things, the participants consider the event, where they train daily and play several matches, to be a great opportunity. "It is very important, it is a positive initiative for all the players who are without a team as it means you can compete to play a mini-season that allows you to play well and I think that what the AFE is doing is very positive for the players", explained Ayoze, a 31-year-old winger from Tenerife who played in the ranks of RC Deportivo de la Coruña last season.

For now, the side managed by Thomas Christansen is racking up the victories against Shangai Shenhua from China (1-0), Club Alianza Lima of Peru (1-0) and local side Huracán Valencia CF (1-0). "There's a great atmosphere in the dressing room. If this team had a name other than AFE it would compete at a high level because it has some great players", explained Toni Doblas. "You can see that the players are excited and they are playing with great intensity. You know that chances like these only come around once and you have to give your all", explainedMoré, who scored the winning goal on Sunday against Alianza Lima.

"At the end of the day this is about playing football and when people come together who know how to play it is much easier", concluded Ayoze, a player who, together with his 23 teammates, is hoping that these AFE sessions will allow him to find a team on the 31st of January in order to be able to keep doing what he loves best: playing football.