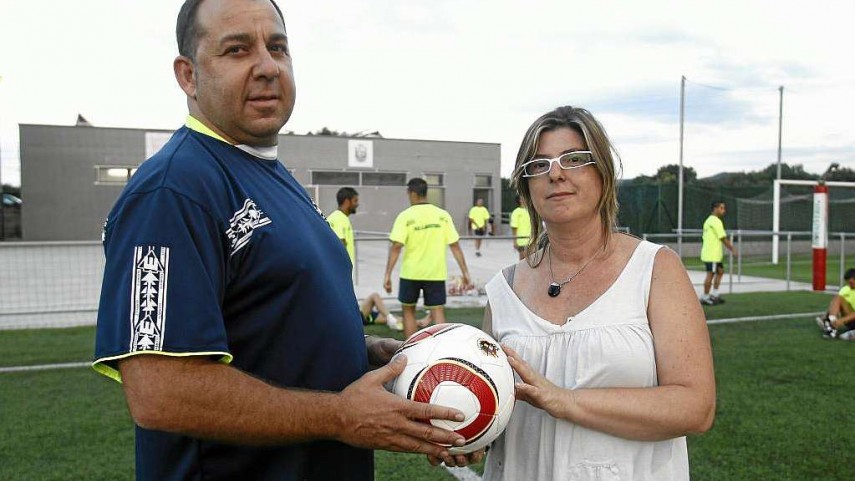 After speaking with the female president of Leganés, in this second offering, LFP.es speaks to Isabel Tarragó, the head of UE Llagostera.

Isabel Tarragó, the president of UE Llagostera, personifies humility. The head of the Catalan club represents the simplicity and sacrifice that characterise the team from the Costa Brava, which was playing in the Segunda Territorial just ten years ago. Seven promotions in ten years and a well-run club for the last six have allowed Llagostera to enjoy the Liga Adelante for the first time in its history.

LFP.es: How do you run a small club like Llagostera?

Isabel Tarragó: With a lot of common sense. You have to have a clear idea of the income you’re going to have throughout the year, and from there manage it by using all the economic and human resources available to you.

"There are more and more women at football clubs".

LFP.es: I imagine that sometimes there is a lot of juggling to do to settle the accounts of such a small club...

Isabel Tarragó: Yes, but we’re actually used to competing against much bigger clubs than ours, we’re already past that, above all in terms of sports management, where our objective is to get the best performance out of the minimum budget.

LFP.es: What does it mean to Llagostera to play in the Liga Adelante?

Isabel Tarragó: Everyone one is thrilled: coaches, directors, players and fans. We are all really excited about the division and we are working hard in preparation, we are keen to stay in the Liga Adelante for many years.

LFP.es: How has the club progressed with seven promotions in the last decade?

Isabel Tarragó: Despite the changes of division we still always maintain the philosophy of a small, family club. So far we have had to adapt to the various modifications, of which there are a lot, but while we are now a professional club, we still have that family spirit. It has been all change: the biggest has been the level of administration, moving to the Segunda División B to the Liga Adelante. Even so, we all try to work towards one goal.

LFP.es: You said that "patience always has to be broader than the budget. The budget is limited, patience is not". Does that sum up what it takes to be the president for seven years?

Isabel Tarragó: It all helps. More than patience, above all excitement helps. In the end you do it because you like it, because you feel good. We are a big family, we all fight for one goal, we support one another, that is why it is going well.

LFP.es: It is the smallest municipality (population of 8,000) represented in the division, how has football changed in the city?

Isabel Tarragó: People are getting increasingly behind the team, even our geographic boundaries are broadening. Now we’re not just the team from Llagostera, which we mainly are, but from the whole of the Costa Brava too. Neighbours who until recently were rivals because they played in the same division have now come with us to face new challenges in this exciting year.

LFP.es: Two promotions for two teams run by women, Leganés and yours, it says a lot about the changing role of women in football…

Isabel Tarragó: In the end, whether it is a man or woman running a club, they have to do it professionally. Now there are two of us who have won promotion, but there are more and more women on boards and more involved in the operation of the football teams and clubs.

LFP.es: As president you have played an important role, but Oriol Alsina certainly has too. Is he perhaps one of the people, along with you, who has done the most for this club?

Isabel Tarragó: He deserves the credit more than anyone. He has been at the club for ten years and the seven promotions have been his work. It would be unthinkable for the team to reach the Liga Adelante without Oriol".

LFP.es: How much has the family atmosphere at the club had to do with it?

Isabel Tarragó: I guess everything helps in the end. Players feel comfortable, the pressure is minimal. We create it ourselves, but we don’t have the kind of pressure that a big club with more fans would have. Working like that always means working better, therefore, we believe it is a good system.

LFP.es: How are things looking at the start of the season?

Isabel Tarragó: It is a complicated season; we are realists. Our goal is to seal our place next season as soon as possible. I’m sure we’ll achieve it through hard work.

LFP.es: Eibar have opened the floodgates, do you dream of repeating that success with Llagostera?
Isabel Tarragó: We know how important it is to stay in the division. Our hope is to stay there for many seasons. We’re going to fight for our main goal, anything is possible of course, but we know it is very difficult.