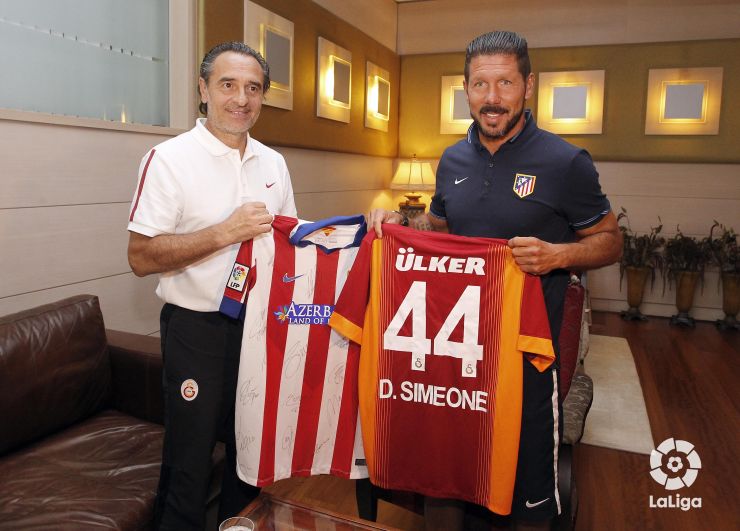 Galatasaray get behind the LFP World Challenge Tour

Club Atlético de Madrid and Galatasaray AŞ attended an event to welcome the Rojiblancos before the team’s match on Wednesday 6 August in Izmir (Turkey), at 21:00 (20:00 CET), as part of the LFP World Challenge Tour. The manager, Cesare Prandelli, shared a few minutes with Diego Pablo Simeone and thanked the Spanish league for its visit to Turkey.

Galatasaray AŞ’ coach and several of its directors visited Atlético de Madrid’s team hotel at around two in the afternoon to talk to the champions of the Spanish league and  hand a gift to their coach. "Is everything OK? Welcome!", said Prandelli to the manager of the Rojiblancos.

The two exchanged ideas and shared anecdotes in perfect Italian before swapping shirts. Diego Simeone received the Turkish team’s new kit with the number 44 on the back and the Italian left with an Atlético de Madrid shirt.

After the brief meeting, the two managers left to rest and give their final orders to their players before tonight’s match, which ends Atlético de Madrid’s LFP World Challenge Tour with the Liga de Fútbol Profesional, which first took them to San Francisco and México, and finally to Turkey.