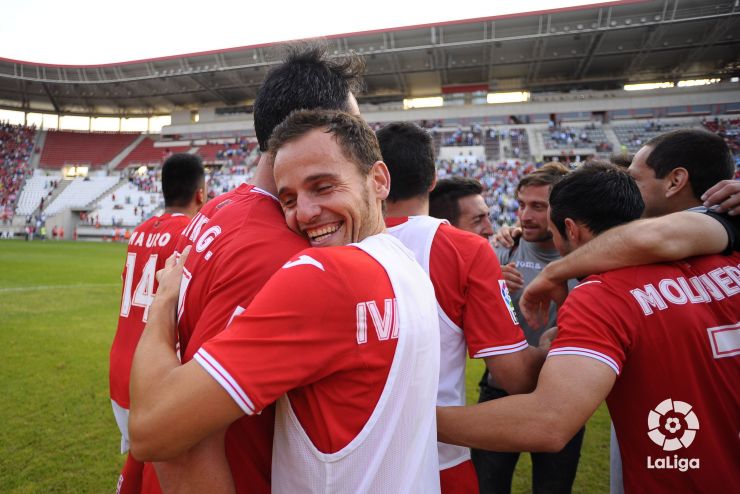 Four teams battle it out for one spot

Murcia, Sporting, Las Palmas and Córdoba will play in the playoffs for promotion to the Liga BBVA having qualified on the final day.

The Liga Adelante closed out the season with some great games, goals, thrills and plenty of surprises. Four teams qualified for the playoffs for promotion to the Liga BBVA, which start on the 11th of June at 20:00 CET. Real Murcia CF, Real Sporting de Gijón, UD Las Palmas and Córdoba CF are the lucky teams who made it through an agonising final Liga Adelante matchday.

Kike García was the architect of the feat for the team from Murcia. His 23rd goal in the competition, against Real Madrid Castilla, qualified his team for the competition in which they will fight to return to the elite. Julio Velázquez’s instructions from the bench were crucial for his players to be able to delight their fans and another Murcia team are now faced with the challenge of a promotion that would mean their 19th campaign in the Liga BBVA.

Where Murcia had Kike García, Sporting had Stefan Šćepović. Throughout the season the team from Asturias had been flirting with the automatic promotion spots and they sealed their place in the playoff thanks to a resounding 3-0 win over CD Tenerife. Next they will be bidding to make the most of the home advantage in the Estadio El Molinón and hoping Serbian double act Šćepović and Dejan Lekić will produce the goods once more.

The Canary Islands will not be without their representative in the playoffs, as Las Palmas are in the Liga BBVA promotion playoffs once again. The Yellows have finished the job they started early in the season and they are again within touching distance of their dream of returning to the Spanish topflight, where they have not played since the 2005/06 season. A year ago it was UD Almería who knocked out the island team, this time they will have to take on the Asturian outfit in the first round.

The final team to seal their place among the four contenders for promotion to the Liga BBVA was Córdoba. The Blanquiverdes owe their position in the playoffs to some impressive performances on the road, which turned out to be vital when it came to the crunch. Now they meet Julio Velázquez’s Murcia, Kike García and company, one of the teams of the season. The die has been cast, and in two weeks’ time we will know which of the four teams has made it to the first division.