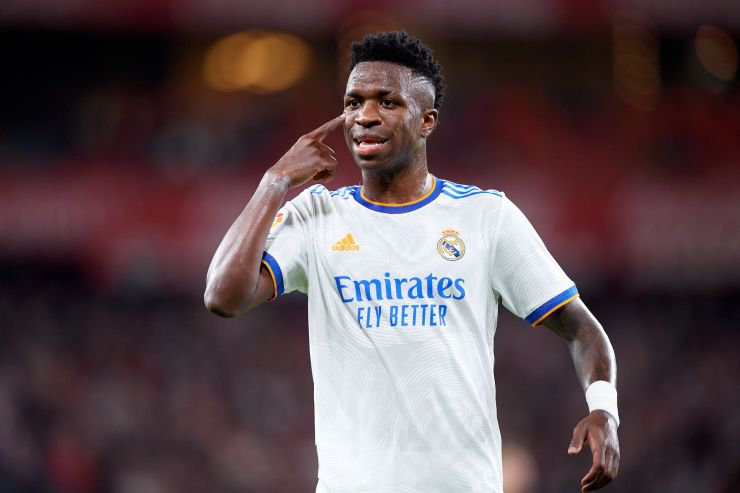 The Brazilian has been making waves in LaLiga Santander this season. He has formed a deadly duo with Karim Benzema, scoring ten goals, putting him third in the list of best marksmen in the division so far this campaign.

The Brazilian has been making waves in LaLiga Santander this season. He has formed a deadly duo with Karim Benzema, scoring ten goals, putting him third in the list of best marksmen in the division so far this campaign. What’s more, he’s also provided four assists.

Vinicius is keen to capture the imagination of Madridistas with his skills and cheeky smile. The 21-year-old is so far one of LaLiga’s best players in 2021/22, standing head and shoulders above most of his contemporaries for his goalscoring and dribbling ability, unique skills that he picked up as a child in Brazil. Find out more about Vinicius here!

His love for the game comes from futsal

In Brazil, football is nothing less than a religion. As a child, Vinicius, like many Brazilian children, started out by playing futsal. When he was only seven years old, he joined Canto do Rio Foot-ball Club, based in the southern part of Sao Goncalo, his hometown. It was there he honed his magical dribbling ability, a gift with which few players are blessed. After two years at the club he went for a trial at Flamengo, and while he received praise for his performances he wouldn’t be signed by the Brazilian giants until he was ten.

He’s the youngest overseas player to have scored in ElClasico

Vinicius achieved this feat in his second campaign at Real Madrid, the 2019/20 season. Despite his tender years, the Brazilian forward exuded self-confidence in a game which he had always dreamed of playing in since he was a child; Real Madrid vs FC Barcelona at the Santiago Bernabeu. In this match he scored the opener as Los Merengues went on to claim a 2-0 win over their arch-rivals. In doing so, he became the youngest foreign player to score in the history of ElClasico, aged 19 years and 230 days, beating a record held by Lionel Messi who found the net in this fixture aged 19 years and 259 days.

Football isn’t the only sport Vinicius is passionate about: he’s also really into basketball. Vini follows both the NBA but also the Brazilian leagues, especially Flamengo’s NBB (Novo Basquete Brasil) team, whom he used to watch live. Although he’s now living on the other side of the pond, he still keeps up his connection to the Rio-based club and some NBA franchises through social media.

The first half of the 2021/22 season has been a dream for Vini, with the Brazilian becoming one of the key figures in Carlo Ancelotti's Real Madrid. The youngster has finally managed to find a spot in the Real Madrid starting eleven after much hard work. In fact, we’re not even at the halfway point of the season, and yet Vinicius has already scored more goals in this campaign than any of his previous seasons at the club. So far the Rio-born player has ten goals and four assists to his name spread across 19 games, 17 of which he played from the start.

Vinicius’s first game in LaLiga Santander was a real baptism of fire: facing Atletico de Madrid. Such a monumental game made for a fitting occasion for a record to be set: he became the first Real Madrid player born in the 21st century to represent the club.