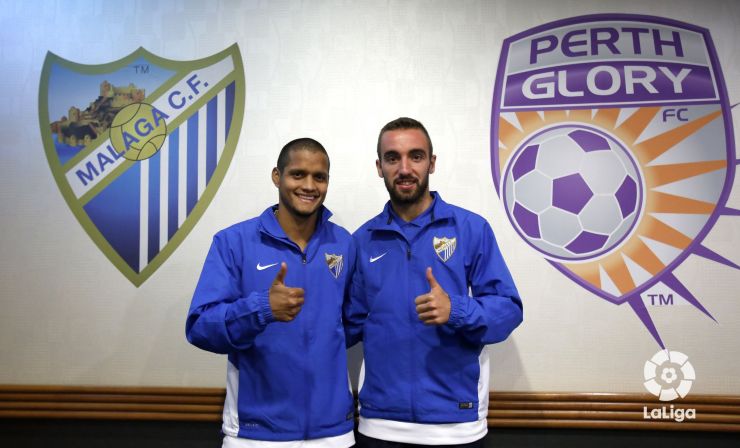 Darder: “We’re very happy with how we’ve been received”

Stephen Yarwood, mayor of the capital of South Australia, has welcomed the Andalusian club in a warm ceremony held at the city hall.

It has all been good news for Málaga CF on this LFP World Challenge Tour on Australian soil. Aside from the 1-5 victory over Adelaide United FC in their first match, perhaps more important is the good feeling that Javi Gracia’s side were left with at the Oval Stadium.

Sergi Darder and Roberto Rosales, who made his debut with the Andalusian side after arriving this summer from Holland’s FC Twente, appeared before the media in the Hotel Duxton press room in Perth, the city where Málaga will end their tour of Oceania.

"The team is happy because a good game of football was seen and we were left with a good feeling. The result is always important, but right now, perhaps, it’s the least of it. We’re tired but happy", said Darder in response to the media’s questions.

The Majorcan player was full of praise for the Australian supporters, who gave them a warm welcome. "We’re very happy with how we’ve been received. We’re grateful, because we came here and found a stadium with a lot of people. That motivates any player, though we’re used to playing in front of a lot of people in the Liga". There were over 23,000 spectators at the Oval Stadium, which is rare in these parts at a football match.

He also emphasised the quality of their opponents last Friday, Spaniard Josep Gombau’s Adelaide. "We knew Adelaide were a good team. We dominated much of the game, but it was a fairly even match. We came here knowing it would be a difficult game. We knew how challenging the match would be, and we took it very seriously".

Rosales, in the same vein as his team-mate, was impressed by the atmosphere in the first match of the LFP World Challenge Tour. "We didn’t expect so many people at the stadium, but clearly there was quite a buzz around it. People wanted to give their support and it was a really nice spectacle; the venue played its part and it was a nice experience for us", said the Venezuelan international.

Finally, Rosales thanked his team-mates for the welcome he has received over his first few days with Málaga. "They’re a good bunch of guys, good team-mates who have helped me a lot to adapt. And that’s important going into the season. We’ve worked hard and that could be seen yesterday in the match. There are many areas to improve on, but that’s what the pre-season is for".

Málaga will bring to a close their Australian adventure with this Sunday’s game against Perth Glory FC, a match that will be shown live on La Liga TV from 3 pm Australian time (9 am in Spain). On Monday morning, the Málaga squad will start the journey back to Madrid.