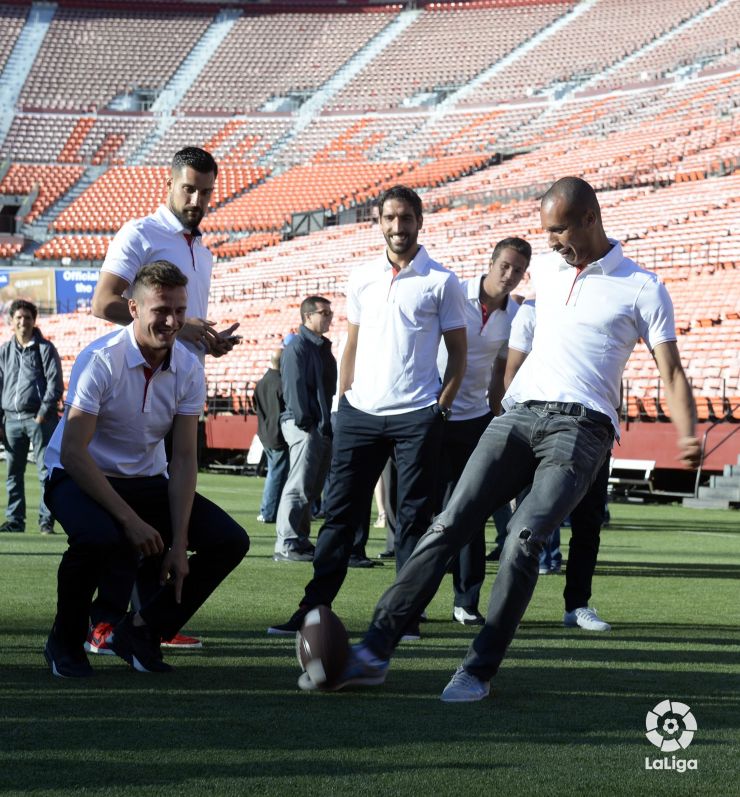 The Madrid side, accompanied by the women’s national field hockey team as well as the president of the LFP, Javier Tebas, and the club’s president, Enrique Cerezo, visited some of the Californian city’s most emblematic landmarks on Saturday evening.

Club Atlético de Madrid are continuing to enjoy themselves on the second LFP World Challenge tour, with the Liga BBVA champions taking a guided tour of San Francisco on Saturday evening along with players from the women’s national field hockey team, who had visited them during their first training session on Californian soil.

The Atlético players and their manager, Diego Simeone, first made their way to Twin Peaks, where they took photos of the beautiful, panoramic views of the city with the national field hockey team. Following that, they visited Candlestick Park, where they will be taking on Major League Soccer’s San Jose Earthquakes on Sunday. That will be their first match of the LFP World Challenge tour, and it kicks off at 16:00 local time (1:00 Monday 28 July Spanish time).

Finally, before resting, Atlético visited the world famous Golden Gate Bridge, although the thick fog made it difficult for them to fully appreciate the structure.

The LFP president, Javier Tebas, and the Atlético president, Enrique Cerezo, also went on the tour of the city with the rest of the expedition. Enrique Cerezo highlighted the fact that the LFP World Challenge gives LFP clubs opportunities like this.

"The tour is great. This is a marvellous city, where we are going to play a game that will be important to how the team prepares for the season ahead. We are very happy. We are the Liga BBVA champions, and coming to play in the USA as the champions as well as being sponsored by the LFP, shows that La Liga is a great league. This trip has been amazing", said the Atlético president.