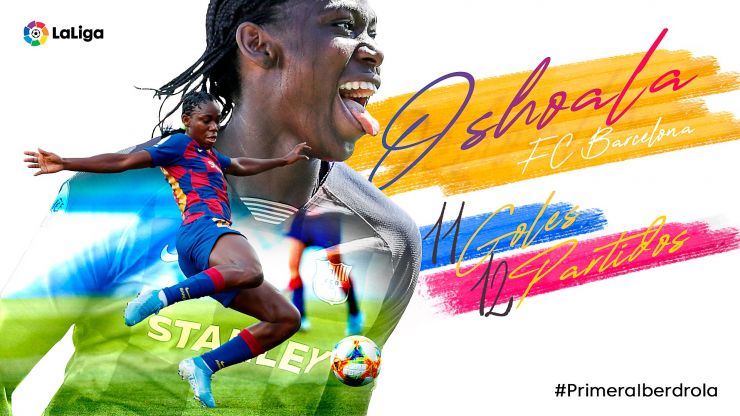 She came in less than a year ago and is already one of the superstars of the Primera Iberdrola. More specifically, Asisat Oshoala joined the Spanish women's football competition on 31 January this year, and has far exceeded the expectations which swirled around her signing. The Catalan club made the loan deal permanent just a few months later.

It is clear that Oshoala has everything required of a striker: speed, strength, power and, top of the list, she is a goalscorer. We only have to take a peek at her stats. With the number 20 on her back, the Nigerian has played a total of 12 matches in the Primera Iberdrola and has netted 11 goals for Barcelona – an average of almost a goal a game and something very few are capable of. As the months have passed by, Oshoala has proven that she can shake things up every time she steps out onto the turf, whether as a starter or a substitute. She never fails. She has scored against Rayo Vallecano, Real Sociedad, Sevilla FC, Sporting Huelva and Atletico Madrid, the latter three being her favourite opponents, with hat-tricks against each of them.

What's more, her goals have been decisive. Take, for example, the one she netted on Matchday 5 of this season against Sporting Huelva. Hers was the only goal of the game, securing all three points for Barça. Also, let us not forget the one she scored at the Wanda Metropolitano against Atletico last campaign.

Not only is she regularly on cue in the national competition, she has opened her account in the Champions League as well – in the final, no less, against Olympique Lyonnais.