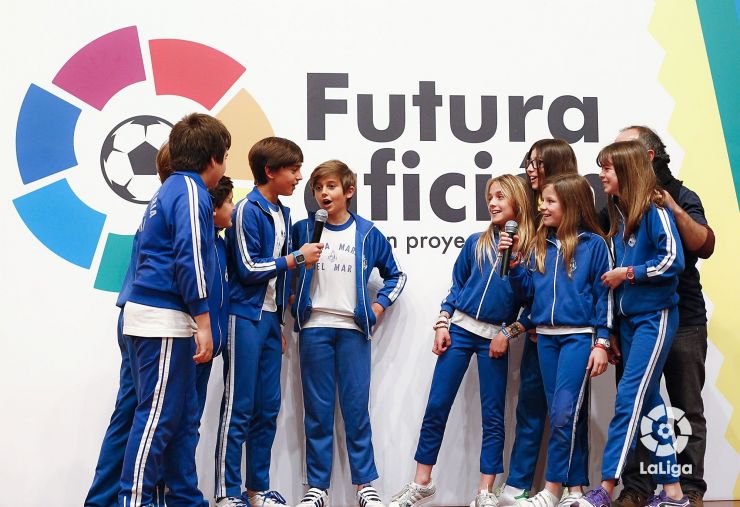 RC Deportivo hosted the LaLiga Foundation for the fifth edition of its educational project.

Two hundred children from the Santa Maria del Mar School in A Coruna (Spain) today, 25 February, took part in the fifth edition of the Future Fans campaign, an educational schools initiative promoted by LaLiga through its Foundation in collaboration with Spain's Sports Council. Throughout the morning, a team of LaLiga educational coaches ran a series of activities and workshops for the students, aimed at instilling and encouraging values such as respect, fair play, tolerance, teamwork and discouraging violence of any type in football.

Several representatives from the Galician Football Federation and RC Deportivo attended the closing ceremony to offer LaLiga their support with its educational initiative. The event was presided over by journalist Pablo Portabales, and included talks by Olga de la Fuente, the director of the LaLiga Foundation and Isidro Gonzalez, the school's principal, as well as Deportivo president, Constantino Fernandez, first-team coach, Victor Sanchez, and Depor players, Alex Bergantinos and Pedro Mosquera.

Firstly, up stepped Olga de la Fuente to talk about LaLiga's objective: "We want to instil some fundamental values in you boys and girls who are the fans of the future. I hope that you've learned that it's important to cheer excitedly, as well as respectfully and politely, at football matches".

The RC Deportivo president continued along that tack, announcing that the Galician club was also working on future educational projects to instil values. "We're fully convinced by this LaLiga project because as soon as we heard about it we wanted it to come to Galicia. We're going to do something similar in schools because we firmly believe in the importance of respect". He also invited all the children there to attend next Sunday's game between Deportivo and Granada CF at Riazor.

The vice-president of the Galician Football Federation, Juan Luis Villamisar, highlighted the importance of carrying out this type of activity: "I only hope that you apply all the lessons learned here to football. I'll see you all at the stadium".

Meanwhile, Deportivo head coach, Victor Sanchez, highlighted his players' attitude: "Mosquera and Bergantinos are the best example that these values, if applied from a very young age, can open a lot of doors for you". The two players brought the event to a close, to huge expectation from the school children. "This is a great initiative to learn values from a very young age. It's very important for us that people come to the stadium to cheer and not throw insults", said Mosquera. His teammate, Bergantinos, followed his lead to close proceedings: "We want to feel that our fans are supporting us and not criticising us. That's important to get across".