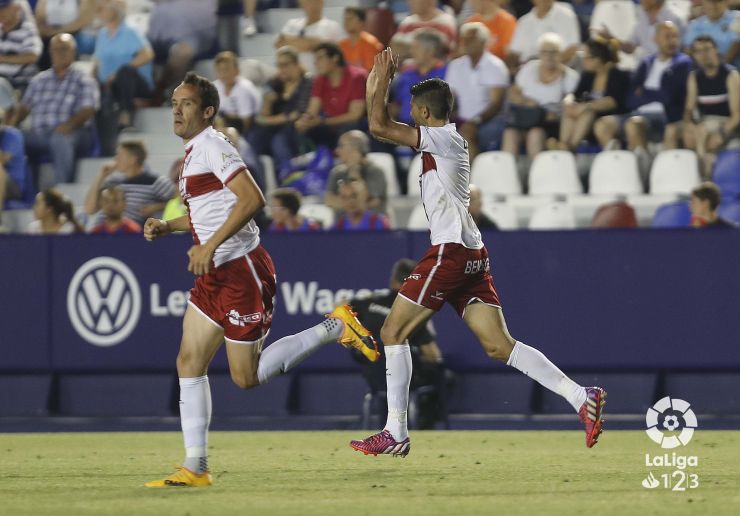 Huesca reach the playoffs and UCAM bow out of LaLiga 1l2l3

On a passionate final matchday, the Aragonese outfit beat R. Valladolid and R. Oviedo to the last promotion playoff place on offer. Meanwhile, Almeria, Nastic and Alcorcon made it to safety in LaLiga 1l2l3 at the expense of UCAM, who suffered defeat in Tarragona.

Huesca claimed a LaLiga Santander promotion playoff place with an impressive victory over Levante at the Ciutat de Valencia – the hosts unbeaten at home this season going into the final match of the season. Levante took the lead through Jose Luis Morales just minutes after they had Rober sent off, but Huesca turned things around in quick fashion with goals by Juan Aguilera and Samu Saiz. The Aragonese outfit will take on Getafe in the opening tie of the playoffs. 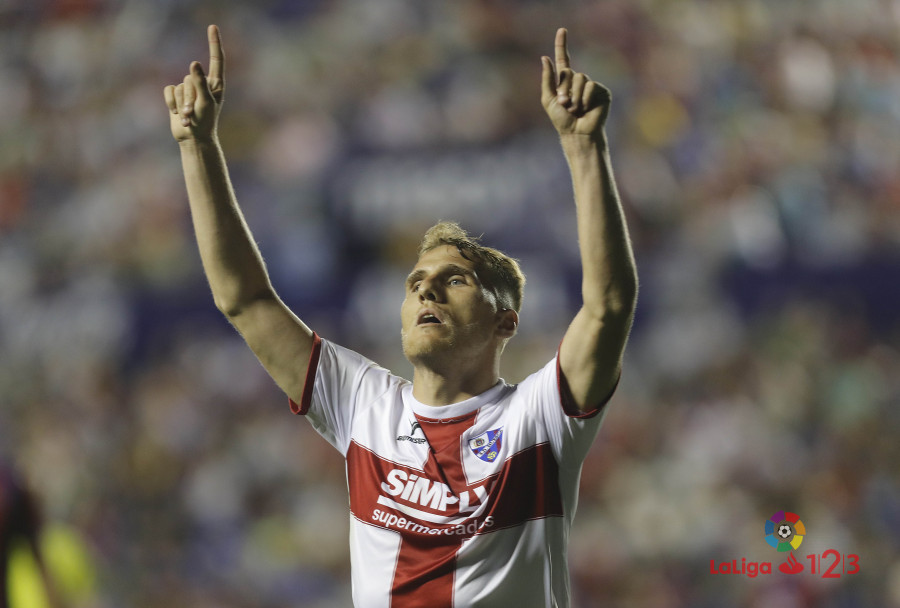 R. Valladolid failed in their bid to reach the playoffs for promotion to LaLiga Santander due to Huesca's victory in Valencia, but they fought right down to the wire. Paco Herrera's side missed a penalty in the second half, but finally clinched victory thanks to superb Juan Villar strike in the dying minutes. They just needed Levante to score another against Huesca to keep their dreams of playing in LaLiga Santander alive. Cadiz, meanwhile, did make the playoffs with a fifth-place finish and will take on Tenerife at home in the first leg, before heading to the island for the second.

It was always going to be difficult for R. Oviedo to pip Huesca and Valladolid to a playoff place, and although Fernando Hierro's charges got the job done with a win over Elche, their rivals did not slip up. After a goalless opening half, Toche and Nando gave R. Oviedo a two-goal lead which ended up netting the Asturian side the three points to finish eighth in LaLiga 1l2l3.

Omar had the biggest impact on this match, with a wonder goal to boot. The player put Tenerife in the ascendancy from his own half. Carlos Ruiz went on to double the visitors' lead, but Zaragoza refused to be silenced. Guti pulled one back for the hosts on 85 minutes, although they were unable to prevent Tenerife from taking the three points.

Stefan Scepovic gave Getafe an early lead with just seven minutes played, but Brandon's brace turned the scoreline on its head. Just four minutes later Scepovic was on cue again to equalise for the visitors. Mallorca reasserted their lead through a Getafe own goal, but Emi's 85th minute goal saw the points shared at the Iberostar.

The home team started off in control and had the better chances. They needed a win to remain in LaLiga 1l2l3 and went out in search of the opener, which came 15 minutes in. Jorge Morcillo's header was enough to give them a 1-0 victory and secure their place in the division for another season.

As soon as Almeria found the back of the net at the Estadio de los Juegos Mediterraneos, Alcorcon did the same at the Santo Domingo. The home supporters went wild with Alvaro Gimenez's goal, which gave Los Alfareros some breathing room. Then David Rodriguez and Daniel Toribio extended their lead in the second half, allowing the Madrilenians to celebrate salvation. 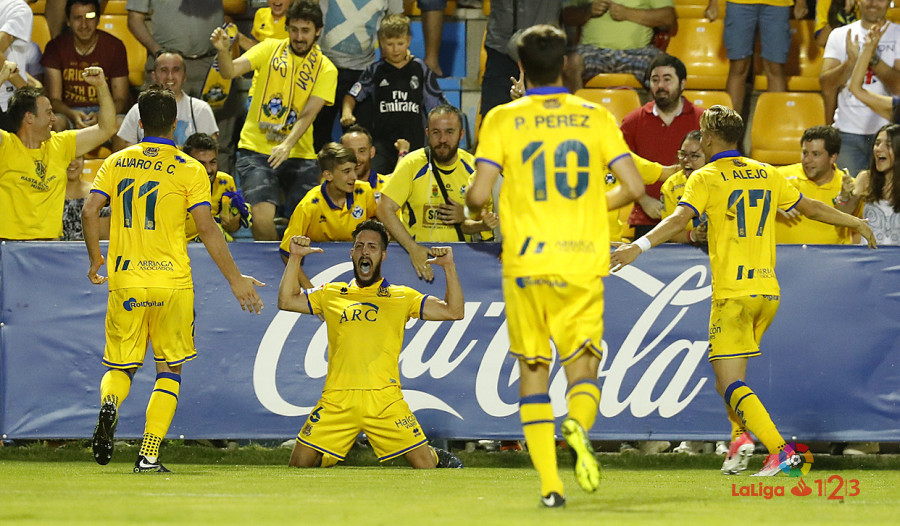 A draw was all Nastic needed and they managed the game superbly. However, they did have a heart-attack moment with 15 minutes left to play when the Murcians were awarded a penalty. Jona had a golden opportunity to keep UCAM in LaLiga 1l2l3, but Manolo Reina, the captain of the home team, produced a heroic save to prevent the spot kick from going in. Manu Barreiro snatched the winner for Nastic in injury time. 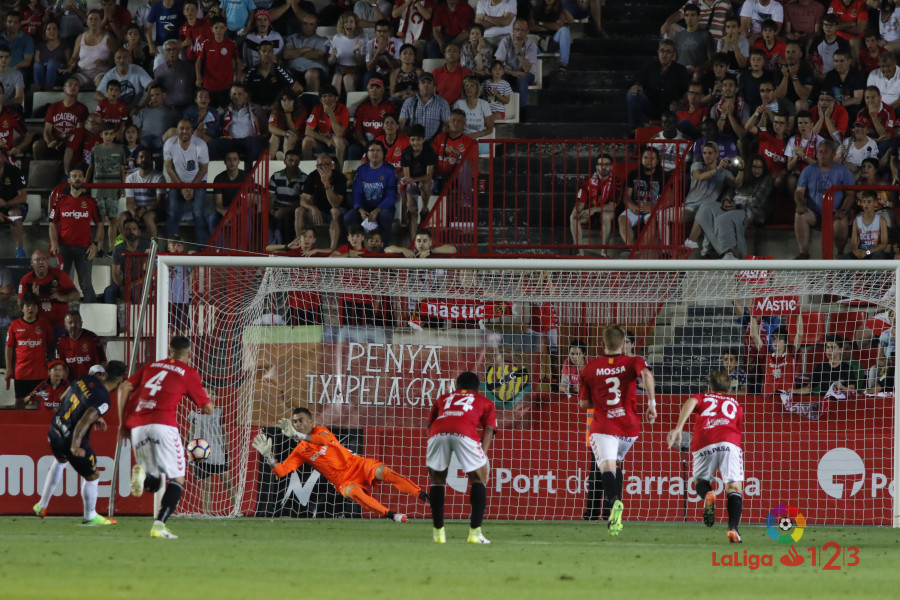 There was nothing at stake for either of the two teams in Cordoba. The home side had made it to safety on the previous matchday and Girona were already a LaLiga Santander team, but the Andalusians gave their fans a great send off with a victory. The goals did not start to flow until after the interval: Felipe Sanchon put Girona ahead, but Cordoba struck back immediately, Federico Piovaccari equalising just five minutes later before Carlos Caballero completed the comeback late on.

Rayo closed out their 2016/17 season with a victory over one of the breakout teams of the campaign: Sevilla Atletico. Javi Guerra and Santi Comesaña sent the Madrilenians on their way to victory either side of half-time. Although they conceded shortly before the final whistle, they had done enough to take the three points and finish the season on a high.