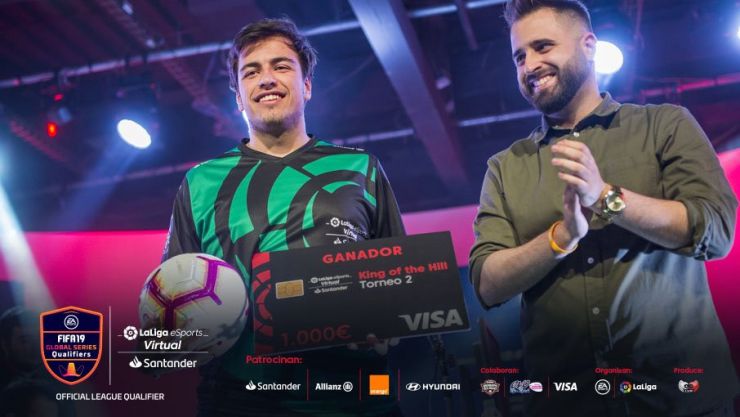 The Asturian successfully defended his title after seeing off CRAZY_FAT_GAMER_ in a 3-2 aggregate win.

Following on from a truly breathtaking start to the Virtual LaLiga eSports Santander competition, the second tournament most certainly didn't disappoint, offering up bags of entertainment and excitement.

Thousands of gamers entered the second open tournament of the season, with Javierpg0206, CRAZY_FAT_GAMER_ and AD Alcorcon duo DanielAguilar4 and ADAcarayol ultimately prevailing and getting the chance to travel to Barcelona to try and wrestle the 'King of the Hill' title from Gravesen.

The Asturian-born player was made to work hard for victory and had to be at his very best to overcome CRAZY_FAT_GAMER_. The Italian gamer, who lives in Gandia, won the first tussle 1-0, before Gravesen made a lightning start to the second encounter, in which he went on to claim a 3-1 triumph to once again secure his crown.

Meanwhile, in the semi-finals, Javierpg0206 recorded a 2-1 aggregate success over DanielAguilar4, whilst CRAZY_FAT_GAMER_ posted a 4-2 win over ADAcarayol. The Italian then edged past Javierpg0206 courtesy of a narrow 6-5 aggregate victory.

The next open tournament kicks off on 21 January and runs until the 31st of the month. Once again, the top four participants will head to Barcelona to pit their wits against Gravesen for the 'King of the Hill' crown and book their place in the final phase.