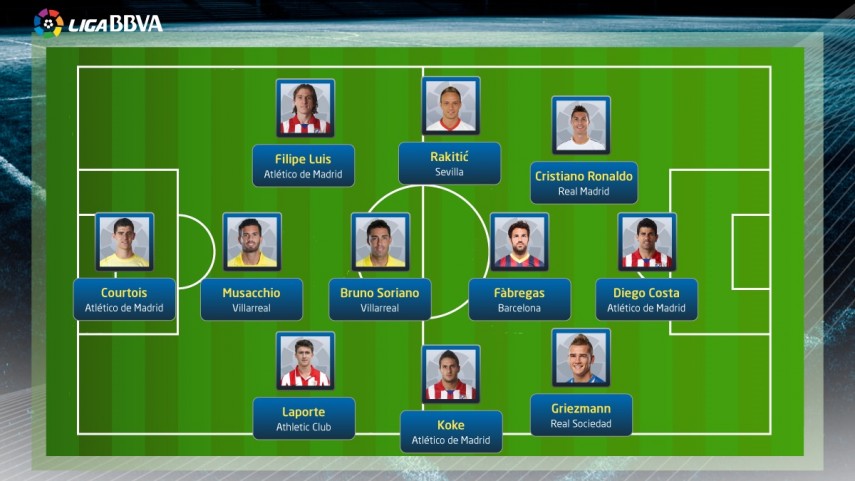 The cream of the first round

The LFP.es journalists have selected the eleven best players from the first round of Liga BBVA matches.

After a passionate first round of Liga BBVA matches with a superb standard of football, LFP.es' team of journalists has selected the top eleven players from the first stage of the competition.
Between the sticks is Club Atlético de Madrid's keeper Thibaut Courtois, whose average of 0.58 goals conceded per match and admirable consistency have made him one of the cornerstones of the first half of the season for Diego Pablo Simeone's men.

The rear-guard is made up of three players. Aymeric Laporte has been one of the stalwarts of Athletic Club's great season. The contributions of the Frenchman have increased exponentially and there is more to come. Luis Filipe, of Atlético de Madrid, has consistently put in some excellent performances and the final choice is Villarreal CF's centre-half Mateo Musacchio, one of the stars of another team that has turned heads in the first half of the championship.

The centre of the pitch will be roamed by four players. Jorge Resurrección 'Koke' has been the brains behind Atlético's success in recent years, Ivan Rakitić is the engine and soul of a Sevilla that is starting to find its spark and Bruno Soriano at Villarreal is back to playing the football that took him to the Spanish national team not so long ago. The fourth choice is Cesc Fàbregas, whose goals and assists have made him one of the standout players for league leaders FC Barcelona.

Up front we have the top three goal-scorers from the first 19 matches. 20 goals from Cristiano Ronaldo, the Real Madrid CF striker, make him a shoo-in. The same goes for Atlético striker Diego Costa, who is in the midst of his best season as a professional with goals galore and some stunning performances. The increasingly clinical Antoine Griezmann completes the trio. His 12 goals are partly responsible for Real Sociedad de Fútbol's rise up the table in recent weeks.

There is not room for everyone in the all-star side, but we cannot sign off without a mention of some other footballers to have dazzled so far this season. Mikel Rico, Alexis Sánchez, Luka Modrić, Javi Guerra and Pepe are some of the men who came close to making our team from a very tight Liga BBVA that is replete with world-class players.