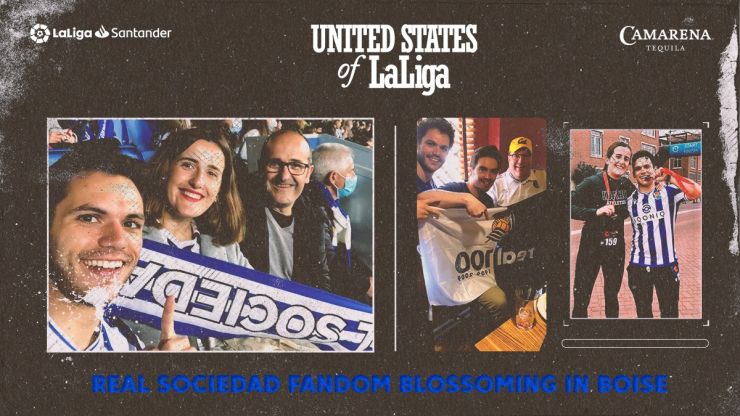 Boise, Idaho is home to the largest congregation of Basque people in the United States, many of whom emigrated to the U.S. state capital during the late 1800s to work as sheepherders.

Boise, Idaho is home to the largest congregation of Basque people in the United States, many of whom emigrated to the U.S. state capital during the late 1800s to work as sheepherders.

While the Bilbao-based Athletic Club boasts the bigger fanbase in Boise, Basque rivals Real Sociedad are making their presence felt.

Josu Bieter, whose great-grandfather emigrated to the area to be a sheepherder, grew up in a divided household—his father’s family featuring Athletic allegiance, while his mother, Nere, hails from Errenteria, approximately 10 kilometers outside of San Sebastián.

“I’m kind of born into being a Real fan,” Bieter says. “I remember growing up, that was the only soccer jersey we’d wear in the house.”

While Bieter’s football fandom wasn’t to the level of his mother’s, he’s grown to follow and love the beautiful game more and more. His girlfriend, Ane, who is from Azpeitia, Spain, is also a massive Sociedad fan.

“She’s kind of got the fire lit in me,” he says. “She’s definitely had a role in making me a bigger fan.”

Bieter, whose first time watching Real Sociedad in person was during one of the last matches of the 2006/07 campaign that saw Los Txuri-Urdin relegated to Segunda División, most recently saw the club this past April at the renovated Anoeta Stadium.

With aspirations to move to Spain for a year or so in the near future, Bieter is also anticipating becoming a regular at Anoeta.

“I definitely want to get season tickets and follow the club more,” he says.

While he’s still in Boise, Beiter and other Real Sociedad fans are banding together to make their voices heard as they plan to revitalize Boiseko Txuri Urdinak, the club’s first supporter’s group in the United States that began in 2010 in conjunction with Jaialdi, one of the largest Basque festivals in the world held every five years.

“Being around all the Athletic Bilbao fans here, we kind of want to rival them,” Bieter says. “We’re starting to get more group involvement.”