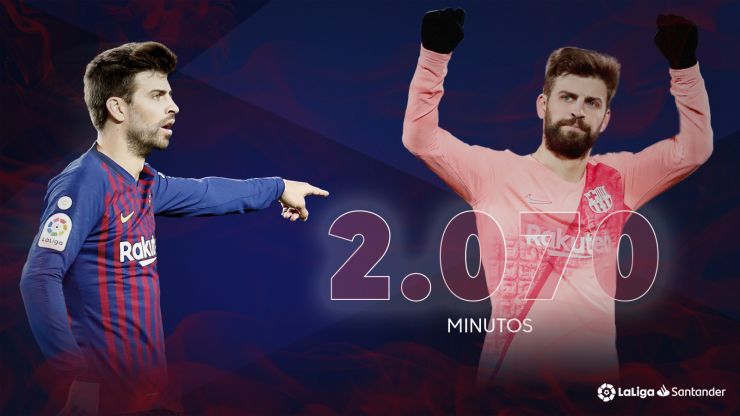 Pique tops the charts for minutes played in LaLiga

The Barcelona centre-back is the only player to have played every minute for his club so far this league campaign. Hot on his heels are Miramon, Ramos and Griezmann.

At this stage of the LaLiga Santander season, there is only one footballer who knows what it is like not to have missed a minute of action. The most used player by Ernesto Valverde is none other than Gerard Pique and he is the heart and soul of FC Barcelona.

Pique has racked up 2,070 minutes across the 23 LaLiga Santander matchdays so far and it is not the only area where he is leading the way. The defender is also the Barcelona player to have made the most ball recoveries (176) and has an equal number of goals and yellow cards to his name (three).

Ahead of Matchday 23, Fernando Calero was neck and neck with Pique, but the R. Valladolid CF centre-back was ruled out of the draw with Villarreal CF after picking up a fifth booking of the season in the club's previous game.

Jorge Miramon, Sergio Ramos, Antoine Griezmann and Damian Suarez are in the chasing pack. The SD Huesca defender, who has been a key player in Francisco's side, is on 2,035 minutes, while Real Madrid captain Ramos is just ten behind. Griezmann follows on 2,001, with Getafe CF's Suarez just behind on 1,980.

The inclusion of Griezmann on a list predominantly made up of defenders is certainly noticeable. The Atletico number 7, who stands in fourth, has scored 11 goals and seven assists in his 2,001 minutes on the pitch so far.

Most minutes played in LaLiga Santander: