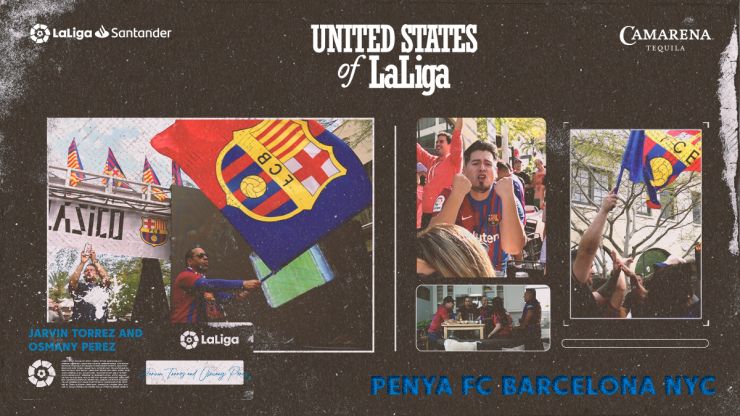 FC Barcelona’s motto is “Més que un club,” which translates to “More than a club.”

Taking a page out of their cherished club’s book, Penya FC Barcelona NYC’s motto is “More than a penya.”

The supporters group, one of the Catalan club’s 1,260 official penyas around the world including 11 in the United States, is a way for FC Barcelona fans in the tri-state area not only to celebrate the club’s successes from 3,000 miles away, but also serves as a community that binds these like-minded supporters together during tough times on and off the field.

“We’re more than a penya, we’re a huge family,” says Penya FC Barcelona NYC member Jarvin Torrez. “That’s where we really connect with each other and all of our problems stay outside. When we watch a Barça game, it’s only about Barça stuff.”

Torrez and twin brother Ervin have become close with peña members Adrià Quingles and Raquel Danés due to their fondness for the club. The group gets together to cook, drink and support Barça from the Big Apple.

“We’ve become like a family,” says Danés, originally from Vic. “We watch games together, we do BBQs. (Jarvin and Ervin) went to Catalonia and they met my mom and went to visit my city.”

For the club and its millions of fans across the globe, things haven’t been easy lately. Facing financial issues, FC Barcelona had to let club talisman Lionel Messi depart after the 2021 season. Following a series of defeats that saw the 26-time LaLiga champions drop to ninth in the league standings, Ronald Koeman was let go as head coach as the club called upon another of their own—Xavi Hernandez—to right the ship and guide Barça back to prominence.

Bolstered by winter signings including Ferran Torres and Pierre-Emerick Aubameyang, Xavi led Barça to second-place finish in LaLiga last season. The club currently sits atop the standings this year with a date against rivals Real Madrid in the latest edition of ElClásico set for 10:15 a.m. ET October 16 from Santiago Bernabéu. The match will be broadcast in the United States on ESPN+.

Barça bested their rivals 4-0 last March as peñas around the world including Penya FC Barcelona NYC and Penya Barcelonista Miami-Dade triumphantly celebrated knowing the tide is turning back into their favor.

“You know you’re a real fan when you’re still supporting Barcelona after all the struggles that we’ve been through,” Penya Barcelonista Miami-Dade secretary Osmany Perez says. “I think Xavi’s turned it around for us. I think everyone that has stuck together and will continue to stick together will see the fruits of Xavi’s labor.”

FC Barcelona fans everywhere certainly hope so as the club searches for its first LaLiga title since 2018/19.

Check out the latest episode of the United States of LaLiga entitled “Més Que Una Penya,” available now on ESPN+ and don’t forget to watch ElClásico on Sunday, October 16.