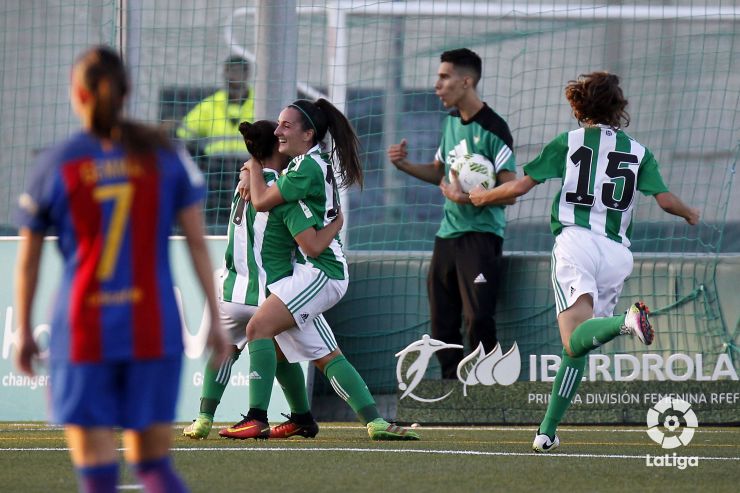 League leaders Barcelona Women dropped their first points of the season, being held by Betis, while the blockbuster clash between Valencia and Atletico also ended all square.

The spoils were shared in the Liga Iberdrola Matchday 10 curtain-raiser, an encounter between second and fourth that always looked likely to be an entertaining affair and did not disappoint.

Rojiblancas captain Amanda Sampedro put her side ahead at the Antonio Puchades Stadium just after the half-hour mark, firing over goalkeeper Christiane Endler from the edge of the box after being teed up by Esther Gonzalez.

Atletico took their advantage into the interval, but Valencia did not let their heads drop – on the contrary, they came out full of purpose and pushed for an equaliser, which arrived less than 10 minutes into the second half. Mari Paz Vilas it was who earned her side a point, nodding into the empty net after Lola Gallardo had saved a previous header from a corner.

The Basques bagged a hard-fought victory that not only arrested their slump, but will also provide them with a timely and much-needed shot in the arm.

Missing several players who are away at the Under-20 Women's World Cup, Athletic did not have it easy up against Granadilla, who beat the reigning champions last season and had their sights set on defeating them again.

The visitors created the first real chances of the game, but Athletic proved the more clinical and forged ahead through Ainhoa Moraza, who hit the net from a fine Eli Ibarra pass. The goal was the perfect way to mark the return to Lezama, which has reopened after the completion of refurbishment work.

It wasn't until the latter stages that Erika Vazquez settled the contest. An impressive individual effort in the 80th minute condemned the Canary Islanders to travel home empty-handed in spite of having given an excellent account of themselves. 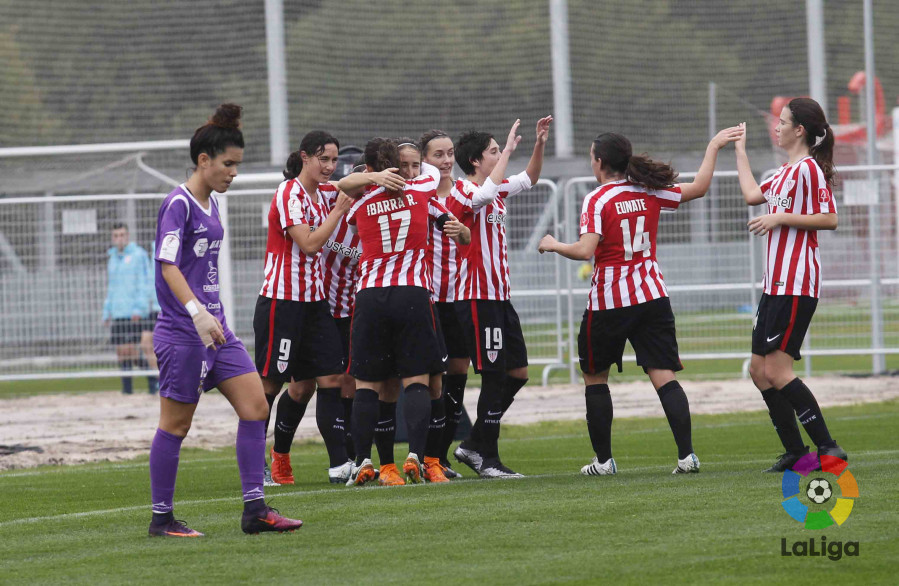 The San Sebastian outfit left Tenerife with their first away win of the campaign courtesy of a formidable all-round performance in which they were solid at the back and the more threatening of the two sides going forward.

The first half ended goalless, although mid-table Real Sociedad came close to opening the scoring through Naiara Beristain's long-range strike. However, the away team did not have to wait long to break the deadlock after the restart, Leyre Fernandez getting on the scoresheet in the 46th minute with a lovely finish that found the top corner.

Manuela Lareo had the chance to extend her side's lead, only for Sara Tui to clear off the line. La Real were not to be denied, though, and Ane Etxezarreta later sealed the deal with a volley that leaves Tacuense still languishing at the bottom of the table.

It was an end-to-end game in Albacete, in which the hosts gave as good as they got, battling hard to claim maximum points and climb out of the relegation zone. As it was, though, they were left ruing a second successive loss as Zaragoza prevailed in what was a rollercoaster thriller.

Albacete were given a golden opportunity to take the lead in the opening minutes, only for Maria Jose Pons to stop Matilde Martinez's penalty. Nevertheless, Mila Martinez's charges did eventually go in front after a quarter of an hour, Alicia Muñoz making the most of a defensive mix-up. Barely 15 minutes later, however, and the tables had been turned, Nuria Mallada (30') and Marta Cardona (33') putting the visitors into the ascendancy.

It was 2-1 at the break, but that scoreline did not last long in the second period, as Tomo Matsukawa restored parity with a 47th-minute free-kick. That might have galvanised the struggling home team had Mallada not pounced to grab her second goal of the encounter 10 minutes later, which ultimately proved enough to secure the spoils and make it three in a row unbeaten for Zaragoza.

There was late drama at the Karla Lekuona Stadium as a 94th-minute winner saw Levante secure a third win on the bounce to maintain their undefeated start to the campaign.

During the first half both sides measured each other up, as chances came and went at both ends, the clearest of which fell to the visitors' Charlyn Corral. However, the Mexican forward spurned the opportunity and the teams went in goalless at half-time.

Levante made a bright start to the second half and soon drew first blood. Charlyn is one of the hottest properties in the division and she once again proved her worth here, this time setting up Maria Jose Perez, who struck the ball low and hard past Oihana Aldai to give the visitors the lead.

Whilst they took their time to find a reply, the hosts netted a deserved equaliser on 78 minutes. However, there was further drama to come, and just as it looked as if both sides would have to settle for a point, up popped Olivia Maria Oprea, better known as Oli, to hand Las Granotes victory. This result leaves the Valencians in third, but they are now level on points with second-placed Atletico.

Rayo were unable to extend their three-game winning streak in Huelva, despite having got their noses in front. Some enterprising football and a fine defensive display ultimately saw the Andalusians dispatch the Madrilenians in this battle between two sides with aspirations to end the season in the Copa de la Reina spots.

Following a four-year stint in England, Natalia Pablos has returned to Rayo intent on securing a Copa de la Reina finish for her side, as testified by the impressive performances she is turning in. Rayo's all-time leading scorer moved the Vallecas outfit into the driving seat here, tucking home from the spot to put the visitors 1-0 up.

After falling behind, Huelva didn't go into their shells, in fact anything but. Antonio Toledo's charges improved as the game wore on and they ended up totally bossing possession. Goals from Anita Hernandez, Vira Diatel and Jenny Benitez sealed the deal for the hosts, who remain firmly on track to end up in the all-important top eight.

The Catalans secured their first triumph of the campaign, with victory here seeing them climb out of the drop zone. These two sides served up a keenly contested encounter in which it was the visitors who made the stronger start. Indeed, Santa Teresa carved out the first clear-cut opportunity, as Sonia Pache found herself clean through on Norma Mendez, aka Meru, but the forward contrived to sky her effort.

As the minutes ticked on, Espanyol began to impose themselves on proceedings, with Cristina Baudet a constant thorn in the visitors' backline. The midfielder came a whisker away from breaking the deadlock with what would have been a sublime goal, but she failed to convert the chance and the sides went in scoreless at the interval.

No breakthrough was forthcoming until the final 10 minutes of the game. Firstly, Eli del Estal fired Las Pericas ahead shortly after having entered the fray, before Anair Lomba sealed victory and three precious points for the hosts.

Barcelona hold on to top spot in the Liga Iberdrola despite having surrendered their perfect start to the campaign after being held by Betis. Las Azulgranas were ultimately unable to see off the Andalusians who fought valiantly throughout.

An early Olga Garcia stunner looked to have set the Catalans on course for a comfortable victory, but newcomers Betis once again proved that they're a force to be reckoned with in this season's top flight.

With her side leading, Barbara Latorre again showcased her considerable talent and came close to doubling the visitors' advantage on several occasions after the break. Elsewhere, Koko Ange N'Guessan produced another eye-catching display as she continues to show exactly why Barça were so keen to bring her to the Miniestadi.

Las Verdiblancas made Barcelona pay the ultimate price for their missed chances when Paula Moreno struck to restore parity. The Betis forward headed home an inch-perfect Claudia Roldan pass from the right to spark wild celebrations at the Ciudad Deportiva Luis del Sol.

Football has a knack of producing the unexpected and this result certainly falls into that category. Betis, who came into this game on the back of three straight defeats, claimed their sixth point of the campaign courtesy of a draw against a Barcelona team that had imperiously brushed aside all of their domestic opponents to date.