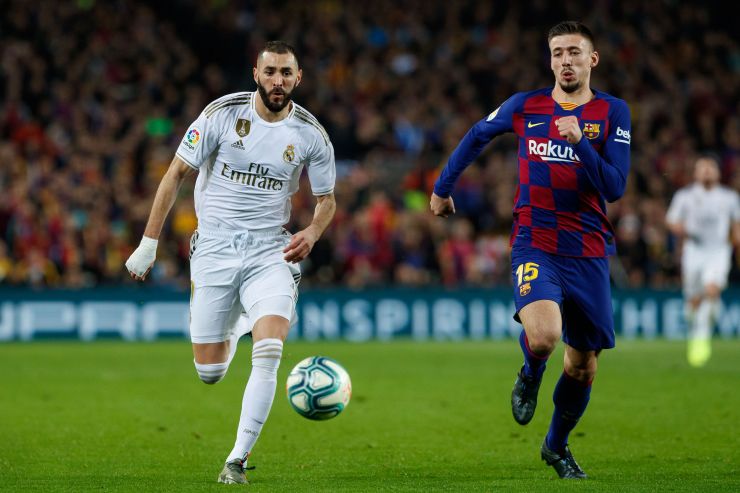 Take a look back at the stats from past clashes between Real Madrid and FC Barcelona. Learn all about the legends of ElClasico!

Since the ball started rolling on Spanish football pitches, clashes between Real Madrid and FC Barcelona have always been much more than just a game. Emotion, honour, struggle, suffering, quality, and goals are what the ElClasico is all about, a fixture which has been seducing lovers of the sport for almost 100 years.

Over the seasons, the top players on the planet have donned their white or Azulgrana shirts to take part in the biggest sporting event in the world. LaLiga Santander's ElClasico has evolved over the years since it was first contested on 17 February 1929 at the Estadio de Les Corts in Barcelona. However, the passion of fans of the two teams has not changed one bit over the course of 182 league encounters, in which Madrid have come out on top on 75 occasions and Barcelona have celebrated 72 victories. The two teams ended up sharing the points in 35 of their matches. Here we bring you several statistics on FC Barcelona and Real Madrid on the back all of these games.

Which player has played in the most ever ElClasico?

Several football legends have made numerous appearances in this fixture for Barcelona or Madrid. Great captains in the history of Los Merengues and Los Cules have proudly defended their club crests, making history and becoming legends in the eyes of their fans. The players who have had the honour of playing in ElClasico on the most occasions are Sergio Ramos, for Madrid, and Leo Messi, for Barça. Both players have made a total of 45 appearances in matches between Barcelona and Real Madrid. However, if we focus on the league competition, there are three Los Blancos players who top the rankings: Sergio Ramos, once again, with 31 games, level with two other capital-club legends in the form of Paco Gento and Raul Gonzalez. For Barcelona, Xavi Hernandez and Leo Messi are the players who have made the most appearances in ElClasico in LaLiga Santander.

Which player has scored the most goals in ElClasico?

After every game between FC Barcelona and Real Madrid, the question arises as to who has scored the most goals, and the top scorer in the history of Barcelona v Madrid games is Lionel Messi, with 26 goals in 45 matches. The Argentine is also the top scorer in ElClasico in LaLiga Santander, with 18 goals in 29 games. If we focus on the league competition, he is followed by Alfredo Di Stefano, who netted 14 goals in the Madrid shirt. Third in the running is Cesar Rodriguez, who managed to scored 12 times for Barça, followed by Raul Gonzalez with 11 goals and Paco Gento with 10, both donning the Real Madrid shirt.

Which player has made the most assists in ElClasico in the 21st century?

The Top 5 in the assists table in matches between FC Barcelona and Real Madrid in LaLiga Santander is led by an Azulgrana player. Leo Messi is the top assist-provider in ElClasico in the league competition, with a total of nine. He is followed by Sergi Roberto and Xavi Hernandez with six, Jordi Alba with five and Karim Benzema with four. Notably, the Frenchman will enter the match on 24 October between Barça and Madrid with the most assists in LaLiga Santander this season.

What was the biggest drubbing handed out in the history of LaLiga's ElClasico?

In the 1934/35 season of LaLiga Santander, Real Madrid thrashed Barcelona 8-2 thanks to four goals from Fernando Sañudo, a Jaime Lazcano hat-trick and a goal by Luis Regueiro. Barcelona's consolations came from Josep Escola and Ramon Guzman. Meanwhile, the biggest hiding handed out by Barcelona to Los Blancos was in the 1950/51 season, when they beat their arch-rivals 7-2.