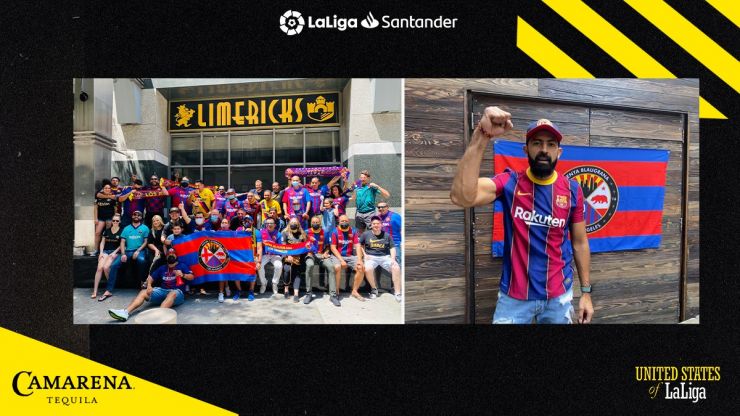 Jose Morataya was born in El Salvador. In 1997, he remembers flipping through his channels in his parents’ bedroom when he came across a soccer game on TV: FC Barcelona vs Real Betis. Watching that match ignited a passion in Jose.

Jose Morataya was born in El Salvador. In 1997, he remembers flipping through his channels in his parents’ bedroom when he came across a soccer game on TV: FC Barcelona vs Real Betis. Watching that match ignited a passion in Jose.

“My country bleeds soccer and I got hooked watching the game.”

Barcelona went on to win the match in extra time and Jose’s fandom of the club was just beginning. He moved to Los Angeles in the early 2000s and his love for Barça continued. Initially, he found it hard to follow the club in the States but players like Ronaldinho joined the club and TV rights expanded.

In the mid-2010s, Jose met up with a few friends in a local bar to watch a Barcelona match and that sparked a series of events that led to the creation of the Penya Blaugrana Los Angeles. Early on, 5-10 people would show up but soon Jose and the other co-founders started to take the group seriously and make it official.

“We decided to go forward and from that moment on, it’s been a rollercoaster, we try to keep the momentum going,” said Jose.

Today, the group has close to 200 members across the diverse Los Angeles community and they are always welcoming more.

“If you come for the first time we make you feel like you’re at home,” he said. “We make it feel like you’re with your best friend watching the game. We chant, we laugh, to the point that the regular members now hang out even if Barcelona isn’t playing.”

One of the best moments in the Penya came during a watch party hosted by LaLiga for ElClásico. Despite a day full of rain, the Barcelona Penya members came out to celebrate where they were joined by club legend Patrick Kluivert. With Barça winning handily, Kluivert joined the Penya members in the rain to chant, bang on their drum, and celebrate. This moment went viral.

This memory sits side by side in Jose’s mind with a more personal one: his kids’ first visit to Camp Nou.

“The moment that I saw my kids going up those steps in the stadium, seeing their eyes wide open, taking in how the environment is so different over there than here in America - to me, that is one of my greatest memories that I’ll take to my grave.”