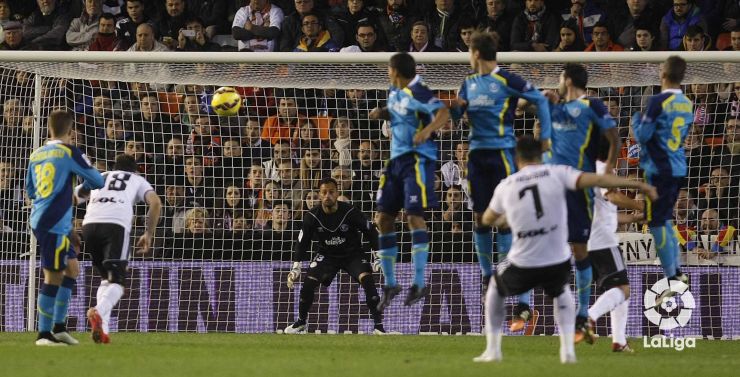 Nuno Espiríto Santo’s side saw their guests off 3-1, with two-goal Dani Parejo putting on a superb performance.

Valencia CF defeated Sevilla FC 3-1 in Sunday’s final clash on matchday 20 of the Liga BBVA. The valuable triumph sees the team coached by Nuno Espírito Santo leapfrog los hispalenses into fourth place, although the Andalusians still have their postponed game against Real Madrid in hand.

The Estadio de Mestalla bore witness to an utterly pulsating first half, played at a frenetic pace and with excitement at every turn. Valencia made a strong start to the encounter and were quick to get their reward, taking the lead as Dani Parejo converted an 18th-minute penalty.

Shortly afterwards, on 32 minutes, Parejo was again the scorer as he produced a masterful finish past Beto to make it 2-0 and leave the home fans jubilant. However, Carlos Bacca reduced the deficit from the spot and had a golden opportunity to level the match before the break, but saw a second penalty stopped by Diego Alves.

The second half began in ideal fashion for the hosts, who hit a third to set themselves on course for victory. After great individual play by Rodrigo Moreno to skilfully beat his defender, Javi Fuego made no mistake from the forward’s pass, and restored calm to the Mestalla crowd. Sevilla did not lose faith in their attempts to turn the match around, but Valencia successfully protected their lead and came away with three precious points.