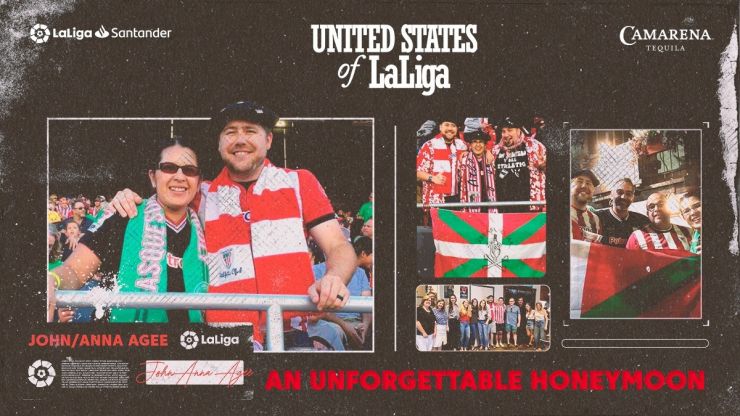 After John and Anna Agee got married in 2014, they didn’t go to St. Lucia or Bora Bora for their honeymoon to sit on the beach, sip margaritas and work on their tans.

After John and Anna Agee got married in 2014, they didn’t go to St. Lucia or Bora Bora for their honeymoon to sit on the beach, sip margaritas and work on their tans. Instead, the newlyweds celebrated their nuptials with a trip to Basque Country to watch their favorite soccer team: Athletic Club.

Because the club was still in the midst of finalizing the construction of San Mamés and the venue wasn’t at full capacity, the Agees were worried they wouldn’t be able to acquire tickets, but thankfully the friends they made during a visit two years prior provided the newlyweds with a wedding gift and experience they’d never forget.

“They were like ‘Don’t worry about it, come over and we’ll figure it out,’” Anna says. “To our surprise, they gave us their tickets to go sit in the front row.”

“They were so welcoming and really nice,” adds John. “Couldn’t say enough about the people there.”

The Agees’ allegiance to Athletic stems from John’s grandmother, Corina de Larrazabal, being Basque by way of the Philippines. As John learned more about his familial roots—including his great great grandfather being born in Llodio—he began to embrace the region’s culture, and of course, its storied club.

Athletic Club is one of three founding members of the Primera División that has never been relegated from the top division since its inception in 1929; the others are Real Madrid and FC Barcelona.

“It all started with me having a small tie to the Basque Country,” John says.

The Agees, who live in Bakersfield, California, furthered their involvement and interest by attending Jaialdi, one of the largest Basque festivals in the world, in Boise, Idaho in 2015. The state’s capital is home to the largest congregation of Basque people in the United States, many of whom emigrated to the area during the late 1800s to work as sheepherders. At the Athletic Club-Club Tijuana preseason friendly during the festival, John and Anna met Ryan Maquinana and soon, Peña Athletic Club California was born.

“The supporters group has almost become like a family,” says Anna, who serves as treasurer, while John is peña vice president. “We have a chat group where we all message during the game—talking about the game, complaining about the refs. It’s almost like you’re at a bar with the group but you’re at home and everyone’s chatting throughout the game.”

While sons Julen, 5, and Jonas, 2.5, are too young to be in the group chat, it’s only a matter of time before the peña adds two new members.

“These kids don’t have a choice,” John says with a laugh. “They’re going to be Athletic fans.”