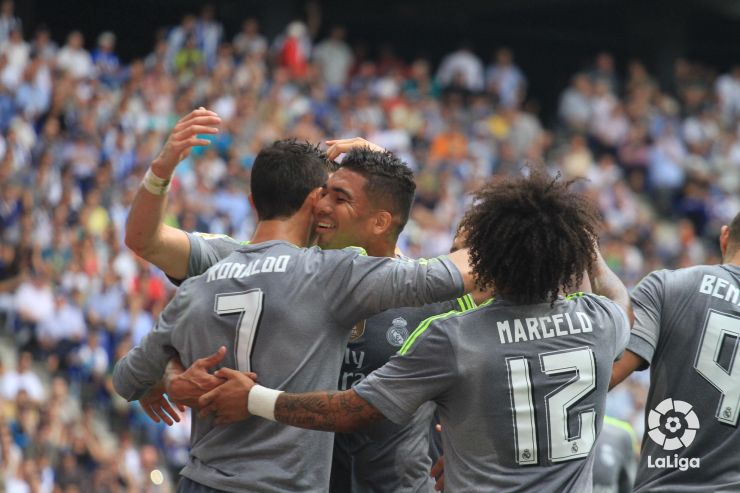 An historic Ronaldo leads the festival of goals against Espanyol

The Portuguese player became the top scorer of Real Madrid in Liga BBVA after scoring five of the six goals of his team at the Power8 Stadium.

Real Madrid got an away win against RCD Espanyol in the third matchday of Liga BBVA, in which the White team achieved an impressive 0-6 against the “Periquitos”. Review the key points of the match:

Cristiano opened his scoresheet with a five of a kind
The Portuguese player only needed 20 minutes to put the 0-3 on the scoreboard with a hat-trick which helped him to be critical for the team. In the second half he scored again and exceeded Raul Gonzalez Blanco record as top scorer of Real Madrid in Liga BBVA with 230 goals.

Espanyol struggled to get into the game
Although Real Madrid had already placed a 0-4 after half an hour of play, Sergio Gonzalez´s men did not stop to try and seek a goal that could cut distances and get them back in the game. Gerard Moreno had the clearest chance with a shot with the outside of his left boot, but the ball went just wide. Felipe Caicedo was also one of the most dangerous players.

Keylor Navas showed again his reflexes
The Costa Rican goalkeeper was again part of the starting lineup and crucial after leaving a clean sheet for the third straight game. Keylor made a great save in the first half to Salva Sevilla´s shot and became a wall when in the second half he stopped a shot by Gerard Moreno that could have been the first goal for the "Periquitos".

Real Madrid Power
The desire to score remained dormant during the 90-minute of the match. Ronaldo was the most efficient, but the rest of the team also joined the attack. Karim Benzema put his personal touch with the goal that gave rise to 0-4, Dani Carvajal also joined in attack on several occasions.

Rotations
With the comfortable result at the Power8 Stadium, Rafa Benitez knew that it was time to give a break to some his players, who on Tuesday will received Shakhtar Donetsk in their first commitment at the UEFA Champions League. Mateo Kovačić entered by Modrić in the 56 minutes, later, Lucas Vázquez replaced Benzema in his return to which was his home, and Raphael Varane took the place of Sergio Ramos. In Espanyol, Sergio Gonzalez also tried, without luck, to give freshness to his team with the entries of Paco Montañees, Jordán and Jose Alberto Cañas.