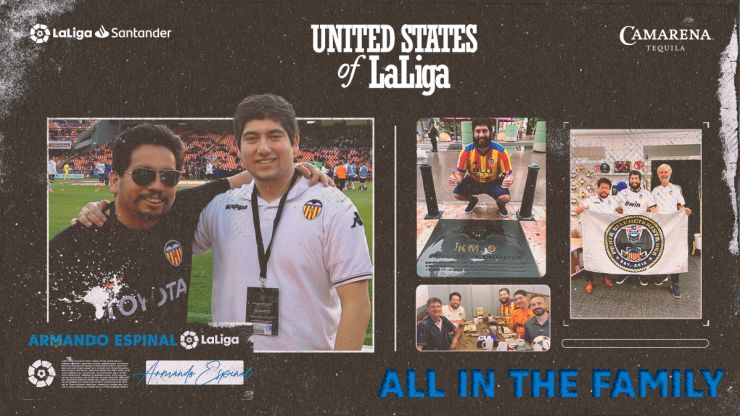 Valencia CF isn’t just a soccer club to Armando Espinal, it’s family. The 29-year-old and brother Michael were raised fans of the LaLiga side by their father, Armando Sr., who watched the legendary Mario Kempes help Argentina win the 1978 World Cup.

Valencia CF isn’t just a soccer club to Armando Espinal, it’s family. The 29-year-old and brother Michael were raised fans of the LaLiga side by their father, Armando Sr., who watched the legendary Mario Kempes help Argentina win the 1978 World Cup.

The younger Armando sat in awe as Valencia rose to prominence, especially on the European stage, in the late 1990s and early 2000s, highlighted by the club’s double in 2003/04. Claudio Lopez’s breathtaking volley against PSV Eindhoven in the 1999/2000 UEFA Champions League campaign not only sealed the win for Valencia that day, but also Espinal’s fandom.

So when the club announced its preseason U.S. tour in 2012, Armando Sr. and Jr. didn’t bat an eye when they had the opportunity to drive from Illinois to Texas to watch the club play in person against the Houston Dynamo that May.

Coincidentally, while back at the University of Illinois for his junior year, Espinal learned of the school’s relationship with the University of Valencia, so he was able to further his fandom by talking with students from Spain, who suggested he start a peña in the U.S.

“I was just in my dorm room messaging people with a framework for how I wanted it to be,” he says. “For me, it was the concept of meeting like-minded folks who have the same passion for the club.”

Peña VCF USA recently celebrated its 10th anniversary as Espinal continues to enjoy a familial relationship with its members and their families and friends via watch parties, sharing travel tips or even picking up apparel for one another when anyone travels to Spain to watch their beloved club. Espinal has been to Mastella three times, including most recently in 2021 with now-fiancee Alexa.

“After going to Valencia and seeing it in person, I understood a little more about why the place means so much to him and the team,” Alexa says. “I was blown away by the friendliness of everyone we met in Valencia including the fans and peña members. … I’m a moderate soccer fan, but I love Valencia because the love of my life loves it. It’s an extension of him.”

While Espinal and Peña VCF USA continue to welcome fellow Valencia CF fans with open arms, the Espinals celebrated their lifelong fandom with a pinch-me moment meeting Kempes and his wife in Florida this past Memorial Day Weekend.

“It’s something that was a full-circle moment for all of us,” he says.