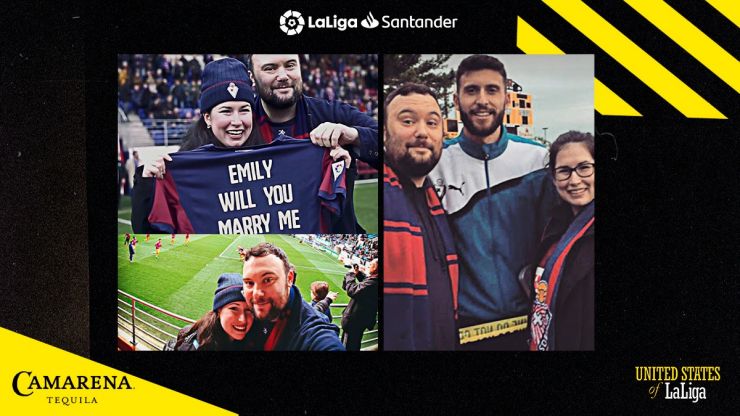 Jonathan and Emily Fritsch weren’t soccer fans when they started dating. In fact, at the time, the two had never heard of SD Eibar - a LaLiga club that would eventually become a part of their love story and their lives.

Jonathan and Emily Fritsch weren’t soccer fans when they started dating. In fact, at the time, the two had never heard of SD Eibar - a LaLiga club that would eventually become a part of their love story and their lives.

After meeting at work and falling in love, Jonathan and Emily pursued their mutual travel passion through a series of trips that took them around the world. One of these trips brought them to Spain.

Despite not being soccer fans, Jonathan wanted to make a trip to a LaLiga match a part of their itinerary. Seeing that FC Barcelona was playing a team he’d never heard of called SD Eibar, Jonathan started researching not just the Basque club but also the city of Eibar and its small but picturesque stadium.

“Really what got me interested in the club is that they are in this tiny little city and a team with a much lower budget than some of these other top flight teams but they’re still able to compete in the top division in Spain,” said Jonathan.

Emily chimed in, “the players are and have been from the Basque region.”

Eibar’s underdog story piqued their interest and ultimately led them to attend their home match versus FC Barcelona. Little did Emily know, she would be experiencing more than a soccer match that day.

Upon purchasing tickets, Jonathan decided that SD Eibar’s stadium would be a special place for a proposal. He sent a cold email to SD Eibar’s team with the hopes they’d help him out. To his surprise, they responded and went all in to help him with his plan.

At halftime, the club brought Emily and Jonathan onto the field where Jonathan dropped down on one knee with a ring - and a special jersey gifted to them by SD Eibar. Their proposal received an on air shout out from LaLiga TV commentator Ray Hudson in the U.S. during his narration of the match.

“Messi scored two goals. Suarez scored a goal. We did see a loss the day that I proposed, but I like to think that I won that day.”

The couple, now happily married, has continued to follow the club, making trips back to Spain, visiting them during a friendly in the U.S., and even integrated elements of SD Eibar into their wedding. They’ve met Eibar fans around the world on Facebook and through WhatsApp groups and now truly feel a part of the club’s family.

“I think that’s what Eibar is all about: that friendship, and that love, and that support, and that passion.”