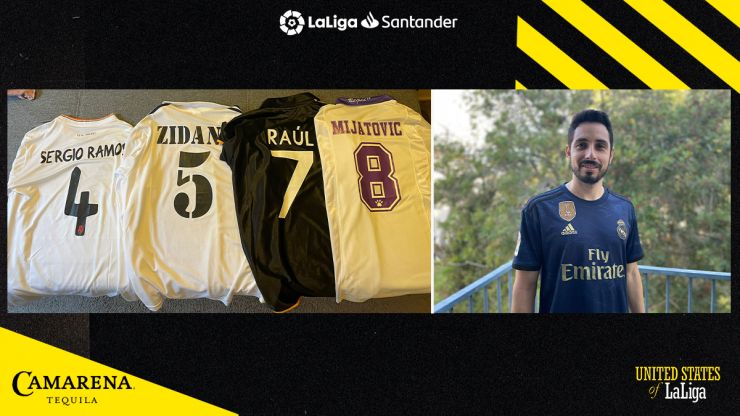 “As a little kid I remember being in front of the TV every Saturday and Sunday watching Real Madrid,” said Diego.

Growing up in Madrid, Diego was raised in a family that had a passion for soccer in its blood. His father’s side of the family supported Real Madrid while his mother’s side was made up of Atlético de Madrid fans.

He gravitated towards his father’s side, following in the footsteps of his dad and grandpa who watched every game.

“It was something really important to me. It was a part of me, watching Real Madrid and watching LaLiga.”

At 18, Diego left Madrid to move to Miami and play tennis. Though a lot changed in his initial years away from home, his passion for Real Madrid never wavered.

Diego has since moved to California and maintained the family tradition of not missing a match, even during extremely early kick offs on the West Coast.

During match days, no matter the hour, he always wears a Real Madrid jersey. He has one from every year since 1992, the year he was born. During big matches, like ElClásico, he puts the club bandera (flag) above the TV alongside a Spanish flag.

He’ll have that set up this weekend for ElClásico where he’ll watch Madrid pursue their goal of winning LaLiga while facing their biggest rival: FC Barcelona.

“The target is always to win. That’s the Real Madrid mentality.”

If Real Madrid win, he’ll be celebrating with his family even from over 5,000 miles away.