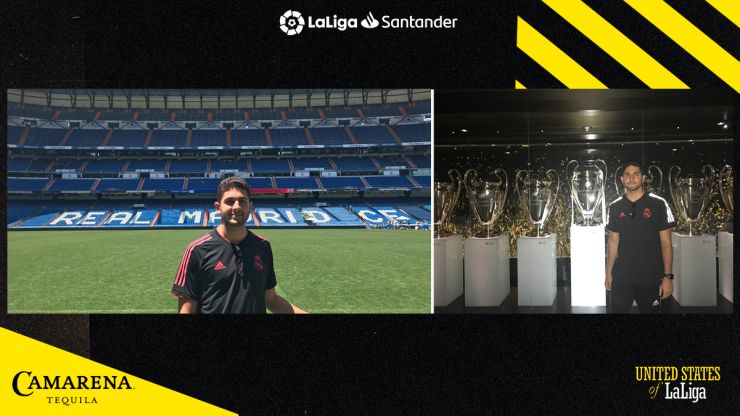 Growing up in a household that always supported Italy’s national team, Khalil Dabdoub followed those footsteps in his very young days as a football fan.

Growing up in a household that always supported Italy’s national team, Khalil Dabdoub followed those footsteps in his very young days as a football fan. However, two events in world football changed Khalil’s fandom between 2008 and 2009. Khalil’s uncle who was and still is a major FC Barcelona and Spanish national team fan - sold Khalil onto the Spanish national team after the 2008 Euro victory including the likes of Xavi, Iniesta, Sergio Ramos and Fernando Torres. Little did Khalil know at this time that it was the beginning of his love affair with Spanish soccer. In 2009, Khalil started following soccer more and Cristiano Ronaldo’s record transfer to Real Madrid along with Kaka and Xabi Alonso caught his eye. At this point, Real Madrid was the only team in Khalil’s eyes - the success of the Spanish national team, record transfers of big names and some convincing from his uncle got Khalil deeply immersed in Spanish soccer. He began watching Real Madrid more and more to follow the big names of Iker Casillas, Sergio Ramos, Kaka, Xabi Alonso and Cristiano Ronaldo and as time passed - he developed a major emotional connection with the team.

This connection led Khalil to appreciate the success of the Spanish national team in 2010 at the World Cup, which involved a team of many Real Madrid players at its core. Later on he was able to see his favorite team and players win the 2013 International Champions Cup in Miami, Florida, which he describes as one of his two most memorable moments as a Real Madrid fan. Seeing Cristiano Ronaldo score two goals in an explosive atmosphere in Miami made him feel like he was at a match in the Bernabeu. The second of his most memorable moments was La Decima in 2014 but not only because it was La Decima but the manner in which it happened. The harder the battle was the sweeter the victory for Khalil and Real Madrid. He says:

“I was around 13 years old when that game happened and I remember sitting in front of the TV sitting on a chair watching the game. As the game continued and we were losing for the majority of it, I remember being angry and throwing things around and then just sitting there upset. However, I'll never forget the moment Sergio Ramos equalized from Modric's corner on the 93'+ min of the game. I remember throwing the chair I was on and just jumping up and down as I celebrated. Witnessing that game, especially that it was the first major final I witnessed as a Real Madrid fan is probably one the best and most memorable moments I have as a Real Madrid fan.”

Khalil collects almost every Real Madrid jersey each season, sometimes even searching for goalkeeper kits - as a former goalkeeper himself. On the topic of his support and personal connection to the club, Khalil says:

“One of the things I love most about Real Madrid is their constant desire to win and high expectations to win everything. I am a very competitive person myself so I can relate to that. I also love the passion from the fans and the energy they bring to the game.”

Khalil’s passion forever lies with Real Madrid and Spain and after years of continued success from Real Madrid and the Spanish national team, he has no regret of breaking away from his household following of Italian soccer.