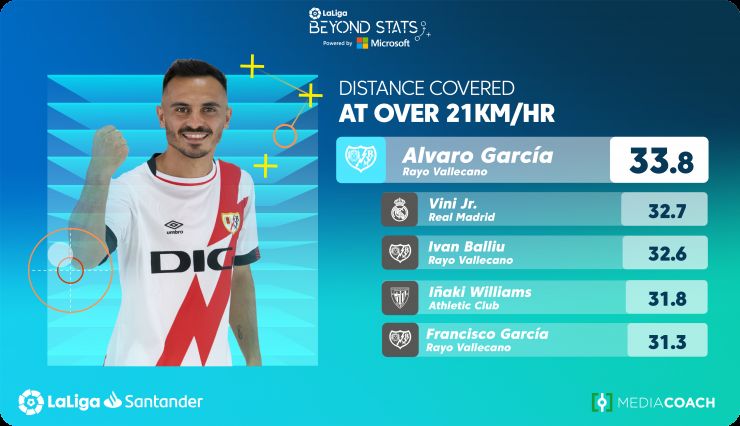 Modern technology not only allows us to analyse the action when a team is in possession, but also enables us to ascertain how many kilometres each player covers and at what level of intensity.

Such statistics help us to understand and complement the technical and tactical information we have in relation to a team. They are also particularly useful when it comes to identifying and preventing physical fatigue within a squad. Although this data is important, good fitness work is enhanced and takes on added importance when accompanied by successful implementation in match scenarios. It’s not a case of simply covering a lot of ground, but running smart.

In this piece, we will explore several rankings related to fitness data.

In this particular ranking, which relates to the 2021/22 campaign, we find a really varied top five in which no two players from the same club make the cut. The road runners who covered the most ground last time out in LaLiga Santander were Sergio Busquets (403.1km), followed by Pacha Espino (378.5km), whilst third place goes to Jon Moncayola (377.4km). Elsewhere, Mikel Merino bags fourth spot (376.3km) and wing-back Javi Galan, who clocked up 373.3km, closes out the standings in fifth.

This data relates to the total distances covered across the whole season.

Distance covered at over 21km/hr

Whilst we continue to analyse the distance covered, we now add another variable to the mix by measuring the total distance covered at over 21km/hr. It is interesting how adding this element results in a radically different ranking in terms of personnel.

In this instance, Rayo Vallecano’s Alvaro Garcia is top dog after chalking up 33.8km at over 21km/hr, followed by Vinicius (32.7km) and with Ivan Balliu completing our podium (32.7km). Meanwhile, Iñaki Williams racked up 31.8km at this speed and Fran Garcia lands fifth spot after covering 31.3km at over 21km/hr.

In the final part of our analysis, we will study the top speeds registered last term as we switch our focus from distance amassed to the highest speeds. In this case, we find that some of the road runners who featured in the other rankings also star in this department. Lying joint top of the pile are Iñaki Williams and Alvaro Garcia (35.4km/hr), with the latter also leading the way for distance covered at over 21km/hr. Sitting in third is Granada CF speedster Luis Suarez (35.3km/hr), whilst Joseph Aidoo ranks in fourth (32.5km/hr) and Ruben Sobrino was clocked doing 35.2km/hr.

These road runners, who covered plenty of ground and recorded some blistering speeds, were pivotal players for their respective teams. Thanks to the technology applied by Mediacoach, the coaching staff at the clubs that compete in the top two tiers of the Spanish game have access to this and a whole host of other data to improve the work they carry out and ensure that LaLiga Santander remains a leading competition and a global reference.

Go deeper into the game with Microsoft and LaLiga on the LaLiga Beyond Stats platform.