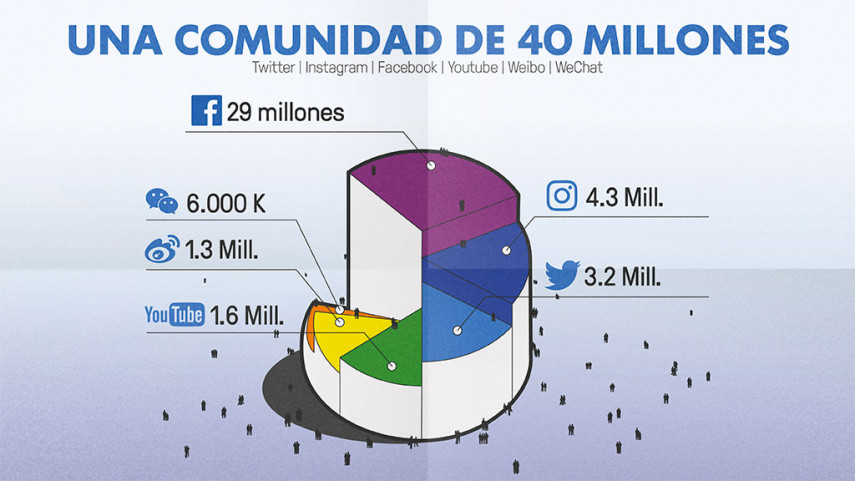 LaLiga's official social media profiles continue to thrive, both in terms of followers and engagement.

The international reach of the LaLiga brand is growing ever wider, thanks to the various projects being led by the institution and the impact of its social media channels. Indeed, the organisation boasts a combined community of over 40 million followers across Facebook, Twitter, YouTube, Spotify, Instagram, Weibo and WeChat.

The platform with the greatest number of followers is Facebook, where almost 30 million users keep themselves abreast of the latest developments from across the Spanish game as they lap up unrivalled video and photo content. In terms of user location, the followers based in Mexico, Colombia, Indonesia, Brazil and Egypt are amongst some of the most loyal.

Meanwhile, over on Twitter, LaLiga has now surpassed the three-million follower mark. The content offered up by the organisation's official Twitter profiles - @LaLiga; the English-language account, @LaLigaEN; and @LaLigaArab, which serves the Arab world - includes photos capturing all of the key match action, iconic videos from the archives, fascinating facts about the LaLiga stars, stunning stats, minute-to-minute updates on matchdays and live coverage of LaLiga events from around the globe.

As for the institution's presence on the photo-sharing platform, Instagram, the levels of growth have been simply staggering. The organisation's official account numbers over four million followers, who express their allegiance towards the Spanish game by sharing their most cherished LaLiga snaps.

In terms of how Spanish football's governing body is faring on YouTube - the video platform par excellence -, the institution has amassed over 1.5 million subscribers and garnered more than 300 million viewings. In addition, we can't possibly fail to mention the Chinese social media platforms, with LaLiga laying claim to over a million followers on Weibo and WeChat.

LaLiga's international expansion continues to permeate the four corners of the earth, whilst also leaving its mark on social media, where the number of followers amounts to 40 million and counting…