Barça sweep the board in possession stakes

FC Barcelona rank top of the LaLiga Santander standings for possession in their own half and the opposition’s, recording figures of 64% and 37.5% respectively. In addition, as we can see in this clip, the Catalan giants lead the way for the number of players involved in each possession, i.e. the number of different players who touch with the ball in the attacking phase.

We are also able to analyse the types of passes played in these attacking moves and these point to a distinctly direct approach, with the Azulgranas ranked as the league’s runners-up when it comes to the percentage of forward passes, with almost 83%. 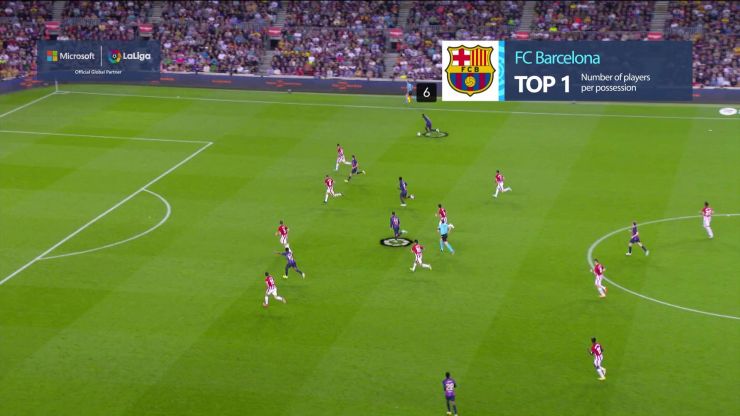 Real Sociedad are currently sitting pretty in third in the LaLiga Santander standings, with this success clear to see in all phases of their play. The Basques’ coach, Imanol Alguacil, is an inspirational figure, both on and off the pitch, and is leading the team to some impressive results.

La Real’s attacking play delivers rewards and they sit in fifth place in the division for the number of dangerous possessions, chalking up an average of nearly four per game, as we can see in this footage. Many of these dangerous possessions are the result of high-impact carries, where they are the second-placed team in the league. These carries are key to creating goalscoring opportunities. Another major facet of the Real Arena-based side’s play is their attacking build-up or, in other words, the passes that make up their possessions. They rank third in the competition in this particular department and there are clearly very few sides who are a match for the Basques when it comes to building up play through possession.

That said, we mustn’t overlook the team’s display in the defensive phase and they clinch fifth spot in the LaLiga standings for recovery rate. This means that they proactively seek to regain possession. Indeed, they have established themselves as one of the league’s toughest nuts to crack when opposing teams seek to build up play. 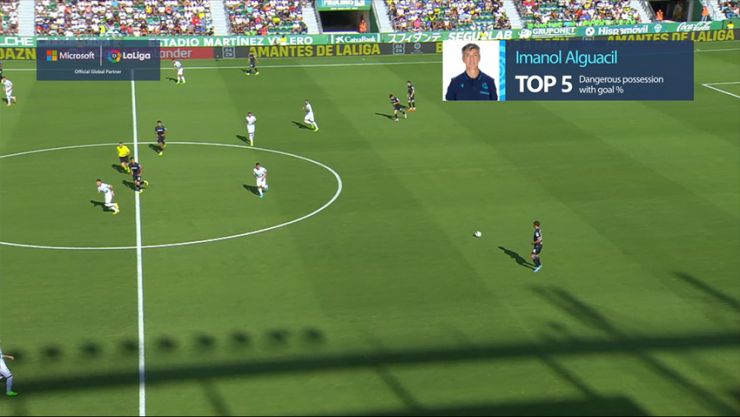 The Brazilian trickster continues to prove exactly why he’s currently considered to be one of the greatest players on the planet. He lies top of the LaLiga Santander tree for high-impact carries, which are a hallmark of his game, as we can see in this video. However, the jet-heeled attacker offers far more than just high-impact carries, and has bagged himself a spot on the podium for the number of defenders he beats with his carries.

The Real Madrid ace is also among the top four players for the number of passes completed in the final third and no other Spanish top-flight player records more dribbles than the Brazilian schemer. All of the metrics in which he excels feed into one another as Vinicius Jr continues to stake his claim and establish himself as one of the top talents in the world game. 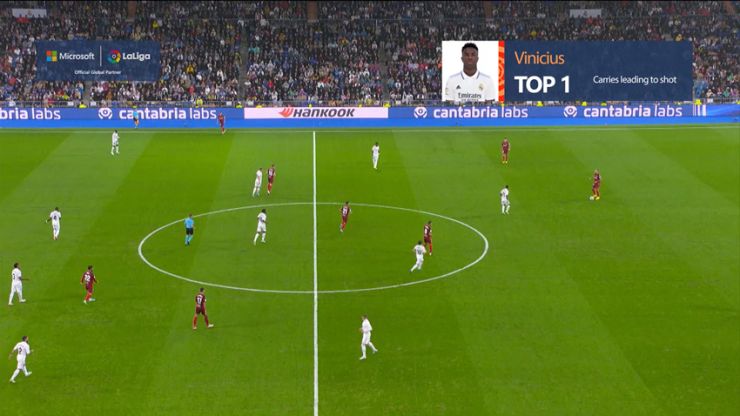 Their names are synonymous with goals and they offer their sides real firepower. Despite having posted some impressive statistics so far this team, neither of the pair will be involved in Qatar.

As we can see in this clip, Borja Iglesias is Real Betis’s standout performer for carries resulting in goalscoring opportunities, which is an area in which Iago Aspas, who tops the RC Celta standings in this area, also excels. The prolific pair also feature amongst the top 10 goalscorers in LaLiga Santander, with the Betis hitman registering 0.73 goals per game and his Celta counterpart averaging 0.53.

Based on their goal returns, it comes as little surprise that the duo feature amongst the top 15 players in the standings for shots on targets. To round off our analysis, it’s also worth noting that the Galician-born goal machine secures a spot amongst the leading five players for high-impact actions, whilst Iglesias lies third in the Betis standings in this metric. 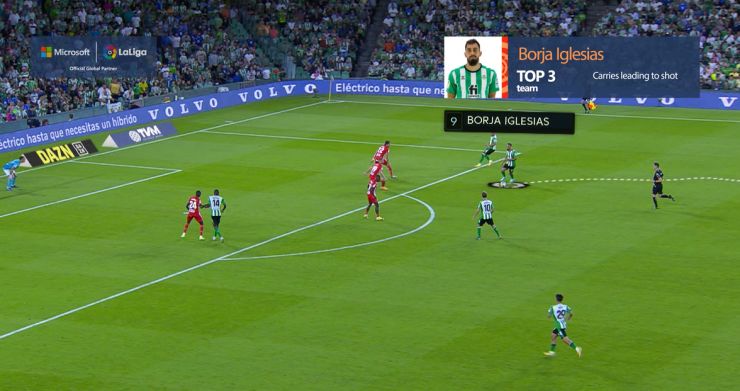 The Uruguayan star is putting plenty of smiles on the faces of the Real Madrid faithful right now as he is weighing in with goals and making a real impact. Many of his on-field actions place him amongst the frontrunners in the key rankings in the Spanish top tier. Indeed, while it is no mean feat to earn a place in just one of the rankings, to feature in so many is nothing short of jaw-dropping.

We can see in this video how he excels at breaking lines with his carries. He features amongst the competition’s top five players for the number of opposition midfielders beaten by his carries. If we follow the action and look at the result of these carries, it is worth noting that he bags a spot in the top five for the number of passes completed in the final third, with almost 23 per outing. Meanwhile, he is amongst the top 10 players for high-impact actions. And, most importantly of all, with almost a goal a game to his name, he is one of the division’s 15 most prolific players. 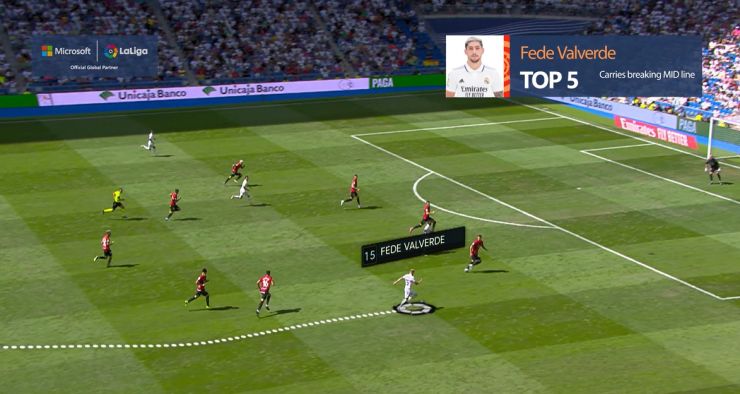 Convex hull out of possession

When it comes to a compact defensive unit, they don’t come any tighter than Athletic Club’s backline. The convex hull allows us to analyse the area a team occupies when out of possession. This metric is measured in m2 and the Basques record an average of 649m2. In this instance, the Bilbao-based outfit top the ranking by virtue of the fact that they occupy the smallest area.

Affording few spaces in the defensive phase makes it difficult for the opposition to create clear passing lanes, while also forcing them to build up in wide areas. 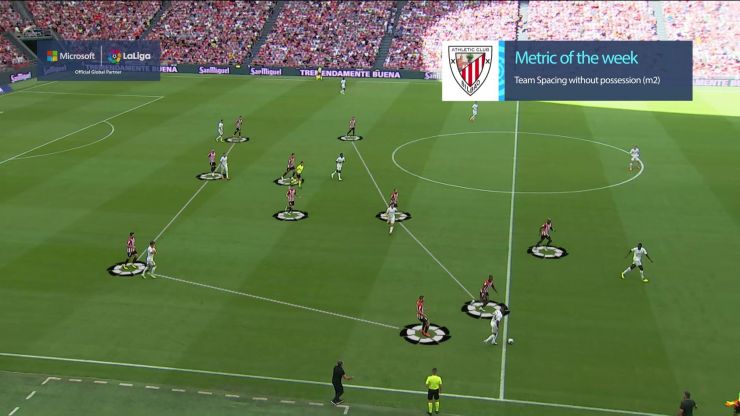