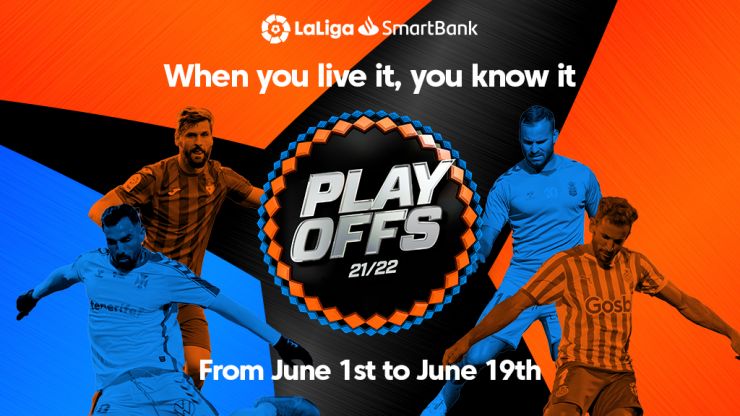 LaLiga presents its new campaign for ‘The Playoffs 21/22’

With the concept "When you live it, you know it", the campaign appeals to the emotions shared between the fans of all four qualified clubs, all of whom are aiming to play in the top flight.

LaLiga has launched a campaign to highlight the 2021/22 Playoffs in which the four qualified clubs, UD Las Palmas, CD Tenerife, SD Eibar and Girona FC, will give their all to reach LaLiga Santander.

Using the slogan "When you live it, you know it", LaLiga is giving the spotlight in its new campaign to the four sets of fans of the clubs fighting for promotion to the top flight. Despite the differences between the fans of each club, they are all united by their excitement and support for their teams.

The campaign consists of a 40 second advert and will be present on LaLiga's digital platforms from today until June 19. The video shows the excitement in each city of the four clubs that have the chance to play in LaLiga Santander.

While UD Almeria and Real Valladolid have already secured promotion, four teams are now preparing for the LaLiga SmartBank’s Playoffs. One of the semi-finals is particularly intriguing, as UD Las Palmas take on CD Tenerife in a Canarian Derby in which everything is at stake. The first match of the two-legged tie takes place on Wednesday, June 1.

Meanwhile, SD Eibar suffered a heavy blow on Sunday when AD Alcorcón scored in stoppage time to deny them automatic promotion. Now, they will have to go through the LaLiga SmartBank’s Playoffs where the third placed team will face sixth-placed Girona FC in the semi-finals. It will be another fascinating tie, as these two teams face off in a bid to reach LaLiga Santander.