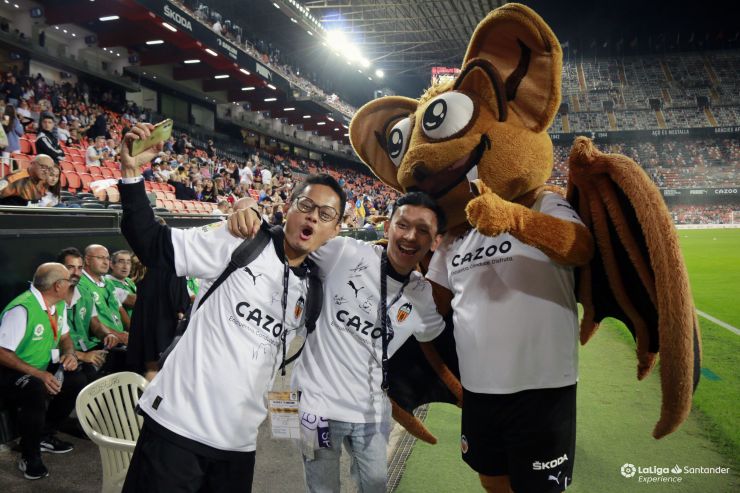 Invitees from beIN Sports and Astro had the time of their lives thanks to Valencia CF, culminating in Los Ches’ pulsating match against FC Barcelona.

The third edition of LaLiga Experience 2022/23 will go down as being one of the initiative’s most thrilling and memorable. The nail-biting encounter between Valencia CF and FC Barcelona at the Mestalla was the icing on the cake of the guests’ whirlwind tour of the Mediterranean city, in which football, culture and entertainment came together to give the journalists, competition winners and influencers from beIN Sports Asia (Thailand and Indonesia) and ASTRO (Malaysia) memories to cherish.

Valencia CF truly laid out the red carpet for LaLiga Experience. Firstly, the guests were shown around Paterna, the club’s training ground. They then got to meet two men’s first team players in Justin Kluivert and Yunus Musah, with whom they had a good laugh and took some photos. They were also introduced to two Valencia CF Femenino stars, Cosette Morché and Iina Salmi, and even had a brief kickabout with them. These are moments which the visitors will surely never forget.

What’s more, Valencia also offered LaLiga Experience a detailed tour of the Mestalla, on which the guests saw the ins and outs of the fabled stadium and learnt about some of its most legendary stories. They were also able to photograph some of its most iconic locations, including the benches, home dressing room, VIP box and press room.

All of this was topped off on the final day with a fantastic match as FC Barcelona rolled into town to battle it out with the hosts at the Mestalla. In the lead-up to the match, the guests were welcomed by club legend Miguel Tendillo, who gave them all club mementos to take away. The LaLiga Experience attendees were then able to watch the Valencia team bus draw up at the stadium from close-range and stand pitchside as both teams carried out their pre-match warm-ups. When it came to kick-off, the guests were then whisked off to one of the finest viewpoints in the stadium to take in a thrilling encounter, which was settled by a Robert Lewandowski strike in injury time.

It’s hard to imagine a better way of ending LaLiga Experience’s third edition of the 2022/23 season, and the final one of 2022. Next year will kick off with visits to Seville for Real Betis vs FC Barcelona and San Sebastian for the mouth-watering Basque derby between Real Sociedad and Athletic Club.