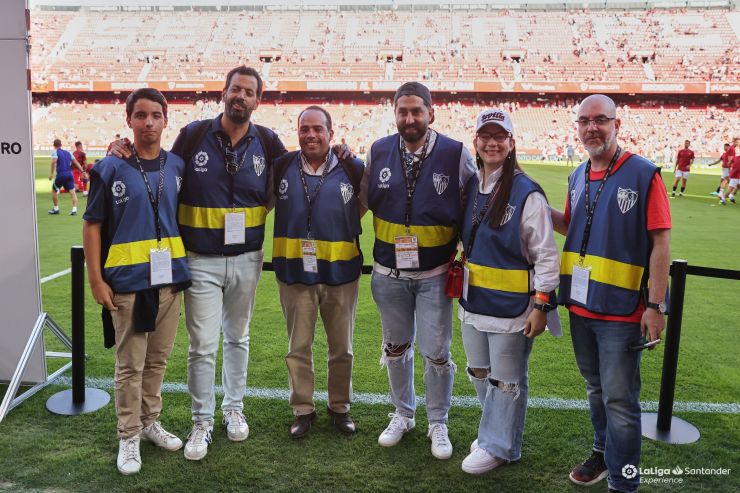 The journalists and winners of the contests organised by ELEVEN Sports Portugal and PrimeTel Cyprus enjoyed an experience which they will never forget, culminating in the clash between Sevilla FC and Atletico Madrid.

The first stop of the LaLiga Experience 2022/23 has come to an end, but it made a lasting impression on the guests of LaLiga's international broadcasters ELEVEN Sports and Primetel Cyprus.

The match between Sevilla FC and Atletico Madrid at the Estadio Ramon Sanchez Pizjuan provided the climax to their visit, during which the city of Seville, its customs, its character and the hospitality of Sevilla FC enthralled those taking part in the first experience of the season.

This season's LaLiga Experience is packed with new features and the winners of last season's #LaLigaUltimateChallenge contests and the journalists from ELEVEN Sports and PrimeTel were the first to get a taste of them, as they starred in the new show to present the experience.

Sevilla FC gave them a warm welcome and offered them an in-depth tour of the Ramon Sanchez Pizjuan stadium. Next was a visit to the Jose Ramon Cisneros Palacios training ground, where they witnessed a training session, and interviewed and tested the wits of Alex Telles and Thomas Delaney of the men's team and Amanda Sampedro, Diana Gomes and Toni Payne of the women's team.

However, the best was still to come. The matchday arrived and our guests enjoyed the incredible atmosphere which brews both inside and outside the Ramon Sanchez-Pizjuan. They had the honour of meeting club legend Pablo Blanco, who awarded a mini-trophy to the winner of the challenges, before watching the players warm-up from the side-lines ahead of the game between Sevilla FC and Atletico. But perhaps what left the biggest impression of all on our guests was the way the Sevilla fans belted out the club anthem.

This first LaLiga Experience of the season has been a roaring success and there is plenty more to come, with the tour returning to action this week with another stop chock-full of surprises ahead of the Getafe CF v Real Madrid game on LaLiga Santander Matchday 8.