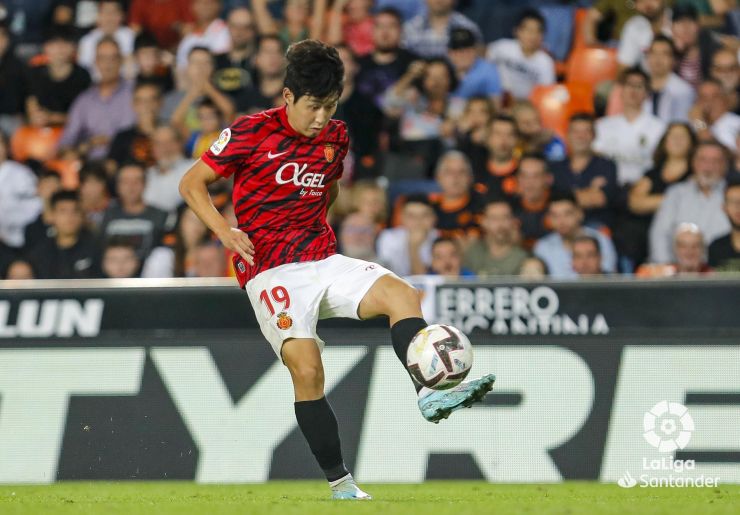 The 21-year-old South Korean is hitting new heights in his second season at Son Moix, where he has established himself as a key piece in Aguirre’s tactical jigsaw.

standout performer in the latest round of LaLiga games as he lashed home a stunning strike to complete a spirited comeback at Mestalla that saw the Balearic outfit chalk up a third win of the campaign.

The South Korean starlet is producing some of his best football in this, his second campaign at Son Moix, where he has become one of the most influential players in the system adopted by Javier Aguirre, who is offering the youngster the regular game time he so craved. If we take a look at the midfield maestro’s statistics from the opening 11 matchdays, we can see that he has already surpassed his numbers from last term after having found the net twice (against Rayo Vallecano and Valencia CF) and provided three assists (against Real Betis, Girona FC and Real Madrid).

“Kang is playing with a freer mind and less pressure than in previous seasons. He isn’t playing second fiddle to anyone. I told him from the outset that he simply had to be an important player for us because I believe that he’s the most talented player in the squad and he’s so lethal in one-on-one situations,” commented the Mexican coach after Lee opened his account for the season.

Aguirre was certainly not mistaken. The attacking ace has unleashed all of his talent after having now settled into life in LaLiga Santander. He is earning rave reviews for the islanders, for whom he tops the standings for high-impact actions, while he also leads the way on assists (three), dribbles (26) and passes completed in the final third (81).

In addition, the statistics obtained from Mediacoach show that he occupies second place in the team rankings for both recoveries made in the opposition’s half (10) and distance covered at high intensity (5.5km) and the most frightening thing for opposition defences is that the Asian attacker still has room for improvement.

The Incheon-born trickster is the player afforded the greatest freedom in the Mallorquinistas’ engine room and is given considerable licence to roam in the playmaker role. His ability to link up with teammates has seen him bring his individual quality to the fore and contribute to the team effort. He has a particularly strong on-field understanding with Vedat Muriqi, with whom he has developed a productive relationship that is yielding some impressive results for the club presided over by Andy Kohlberg.

The creative starlet is blessed with fine dribbling skills and lightning pace, qualities that complement the Kosovo-born hitman’s physical presence to form a duo that is enough to strike fear into even the most resolute of defences. Indeed, Muriqi and Lee have weighed in with seven of Mallorca’s nine-goal haul, i.e. 78%, and they are undoubtedly the standout performers in a team that currently sits 12th in the standings.