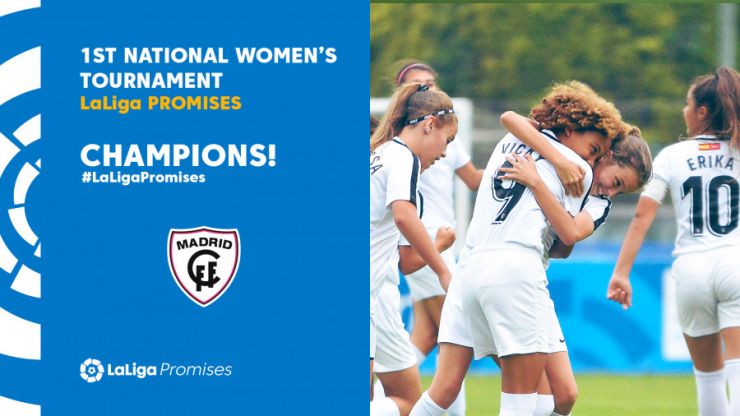 The Madrileñas defeated Levante UD 4-2 in the final – finishing off a brilliant tournament where they have shown great dominance.

In the wake of three days of action of a truly exceptional standard at A Coruña's Abegondo Training Ground, Madrid CFF prevailed to secure the Women's LaLiga Promises Tournament crown. The Madrilenians reached the showpiece without conceding a single goal as the quality of a side led by the tournament's leading scorer, Vicky Lopez - who notched three of her team's four goals in the final - shone through.

Atletico headed into the last four having recorded a clean sweep of victories up until this stage. However, they came up against an extremely disciplined Madrid CFF side who soon put paid to their hopes of glory. Spearheaded by the excellent Vicky, Madrid registered what turned out to be a relatively routine win as they became the tournament's first finalists.

The second semi-final clash proved to be a more evenly matched affair. In a contest of real pedigree, Levante ultimately came out on top to set up a showdown against Madrid CFF that would see the sides renew acquaintances following their goalless stalemate in the group stage.

Vicky yet again proved to be the difference-maker as she tipped this hard-fought and entertaining encounter in Madrid's favour. The capital club's number 9 once again showcased her considerable talent to put the Madrilenians into the ascendancy early on. Levante then struck to level terms courtesy of a fine goal, which was the first time that the Madrid backline had been breached in the tournament. However, it wasn't long before Vicky grabbed her second to restore the Madrilenians' lead. Erika then further extended Madrid's advantage, but the Granotas weren't done just yet and promptly reduced the deficit to set up a grandstand finish. However, Vicky popped up again to put the result beyond all doubt and secure glory for Madrid. The sharpshooter's impressive seven-goal haul in her six outings saw her end the tournament top of the scoring charts.