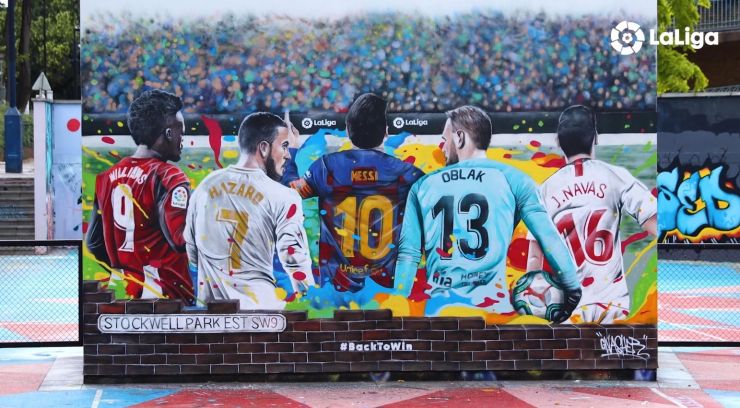 LaLiga and its partners have launched campaigns in over 50 countries to entertain fans and promote the competition’s return.

LaLiga Santander returns to the field today with El Gran Derbi between Sevilla FC and Real Betis. Arriving three months after the competition was postponed, this moment has been made possible thanks to the collective efforts of the league, clubs and LaLiga’s partners around the world, who have added their support to campaigns and content that promote the return of Spanish football.

In anticipation of the return to action, more than 160 global activations, ranging from social media events to large-scale public projections, have been organised by the league and promoted by its partners, providing visibility in more than 50 countries.

Carrying the LaLiga slogan #BackToWin, these initiatives demonstrate that the return of the competition provides far-reaching benefits beyond the world of football and makes a significant impact on the sports industry and those who follow it.

Óscar Mayo, LaLiga’s director of business, marketing and international development, said: “Fans around the world are excited for LaLiga to return and this is thanks to the collaborations with our national and international partners who have supported each of our initiatives fully. All of the campaigns that we have organised together have kept supporters entertained and have helped to ensure this return will be felt globally.”

In Spain, major tourist attractions have been lit up with fan images from around the world thanks to a #BackToWin campaign launched by LaLiga and its partners.

LaLiga partners were provided personalised videos to share through their social networks, inviting fans to upload photos of themselves celebrating the restart of the competition. The photos have been projected over the past two nights onto Madrid’s Puerta del Sol and City Hall, the Golden Tower of Sevilla, Bilbao’s Tourist Office and San Mames stadium and Valencia’s City of Arts and Sciences complex.

To make the presence of fans felt inside the stadiums while behind-closed-doors measures are in place, LaLiga partners have taken part the Applause to Infinity initiative which asks fans to submit a video of themselves applauding as if they were in the ground. As well as providing the call to action through social networks, staff members of LaLiga partners have also contributed their own videos.

The submissions have been compiled into a single track that will be played during minute 20 of every LaLiga match, acknowledging the work of health services in fighting the COVID-19 pandemic and the sacrifices that have been made.

PUMA, LaLiga and a global network of players also joined forces for the #LaLigaBouncesBack promotion. A total of 32 international sports stars featured in a video in which players passed the official PUMA ball of LaLiga to each other virtually, incorporating nine different countries in total. LaLiga Santander players Luis Suárez, Antoine Griezmann and Jan Oblak are some of the players involved, as well as Sevilla FC winger Suso and Real Betis defender Marc Bartra, who are set to feature in tonight’s comeback fixture in Seville.

LaLiga has also put together more than 25 offline events that are being amplified by its partners. For example, a range of urban art pieces have been produced in association with local artists to appear in 12 international cities in the build-up to today’s kick-off, in an initiative called United Streets of LaLiga.

With public events unable to take place across most of the world, many initiatives have been led through digital channels. This has included more than 35 social media campaigns with top influencers that are being promoted by partners.

A large number of digital campaigns have also been launched with international media featuring LaLiga partners, including competitions, ‘Footy Talks’ events and chats with former players. Other content including score predictions and prize draws have also been placed with broadcast partners around the world.

An additional 50 virtual meetings have been organised to give privileged access to key stakeholders as LaLiga returns. These include press toolkit events through which journalists are reminded of the state of play in the competition by LaLiga Global Network delegates, LaLiga Ambassadors and partners.

Other virtual events have been designed for fans to experience the return of the competition in unique ways, including virtual live commentaries and Zoom watch parties in Costa Rica, Thailand, Hong Kong, Singapore, Phillippines and South Africa.

There will also be online LaLiga panel shows in Australia, Thailand and Indonesia, discussing the competition with local journalists, commentators or fans, while a Facebook Q&A will be held in Belgium. In addition, ‘Together Again’ events have been planned in Cameroon and Colombia.

In all of these events, visibility for LaLiga partners is provided.

Shortly after the competition was postponed on March 12th, LaLiga initiated a range of online activities to keep audiences entertained and support ‘stay at home’ measures. With support given by its partners around the world, these initiatives accumulated millions of viewers while also raising funds for health services fighting the pandemic.

Among the most high-profile digital organised during this time were the LaLiga Santander Challenge and the Kick COVID FIFA20 tournament, both held with the aim of maintaining fans’ interest and raise money for health services.

Another virtual event organised during this period was ‘LaLigaSantander Fest’, the first global charity festival held to raise funds to support the fight against the COVID-19 pandemic. Supported by all LaLiga official partners, it brought together various musicians and footballers for the first time ever and managed to raise over €1 million while receiving a global audience of more than 50 million people and becoming a trending topic on social networks.

Óscar Mayo concluded: “LaLiga is a truly global competition and this scale is reflected in the number of activities we have seen. There has been a collective worldwide effort to support fans and a love of football shown by all of our partners. Tonight we celebrate the return of LaLiga but we must share this with everyone who made it possible.”