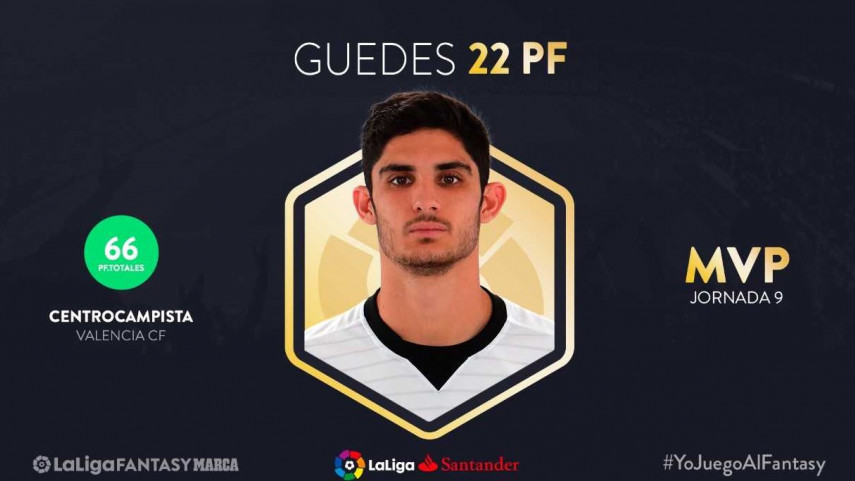 These are the 11 players who racked up the highest number of points on Matchday 9 of the 2017/18 league campaign.

Glorious goals, devilish dribbling, extreme emotions and stunning saves are all synonymous with LaLiga Santander, as proven by yet another thrilling weekend of action. It's now time to take a look at the LaLiga Fantasy MARCA Best XI for Matchday 9.

It was a great weekend for Real Madrid, with Los Blancos beating SD Eibar at the Bernabeu, their second win in a row. Three of their players make this XI, which is more than any other LaLiga club, but The Player of the Matchday from the ninth round of LaLiga Santander fixtures goes to Portuguese attacker Gonçalo Guedes. The youngster struck twice in Valencia CF's 4-0 trouncing of Sevilla FC, both of them stunners. His efforts scored him 22 points, enough to make him The Player of the Matchday.

Between the sticks in this XI is Atletico Madrid's Jan Oblak. The Slovenian stopper was one of his side's standout performers in Los Colchoneros's victory away at RC Celta, keeping a clean sheet and pulling off several top-drawer saves.

The back five consists of Villarreal CF's Mario Gaspar, Madrid duo Sergio Ramos and Raphael Varane, Real Betis's Antonio Barragan and CD Leganes's Joseba Zaldua. The best of these five was the Villarreal full-back, who notched 18 points after a resolute defensive performance and a goal to boot. 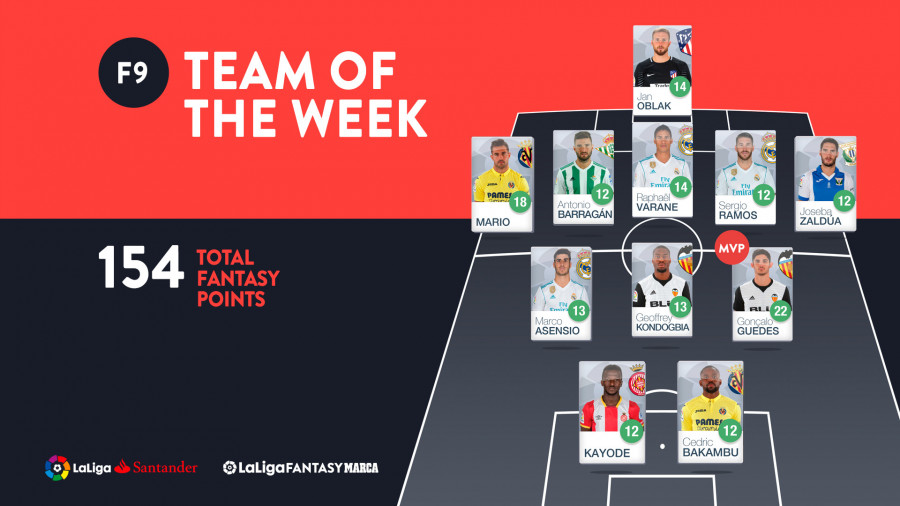 The middle of the park features another Madrid player, Marco Asensio, and two Valencia stars, Geoffrey Kondogbia and Gonçalo Guedes. The pick of the bunch is Guedes – his pace and knack of getting amongst the goals contributed to him earning 22 points.

Forwards Olarenwaju Kayode and Cedric Bakambu round off this XI. Although Girona FC star Kayode didn't manage to find the net, he provided the assist for his side's match-winnning goal at the Riazor last night. As for Villarreal's Congolese hitman Bakambu, he was his team's best player in their win over Las Palmas, opening the scoring against La UD, his eighth in LaLiga so far this term.

Awaken your inner coach by downloading the game, create a league with friends or sign up to the public leagues and get competing with other like-minded lovers of Spanish football. The game is available on mobile devices and tablets and can also be played online via Facebook.

For more information, visit http://laligafantasymarca.com and interact with the LaLiga Fantasy MARCA community on the game's official Facebook page and on Twitter @FantasyLaLiga. Use the hashtag #VuelveElFantasy to exchange views with other social media users and be part of the most exciting adventure of the season.

Don't have a LaLiga Fantasy MARCA team yet? Download the app for iOS or Android now.