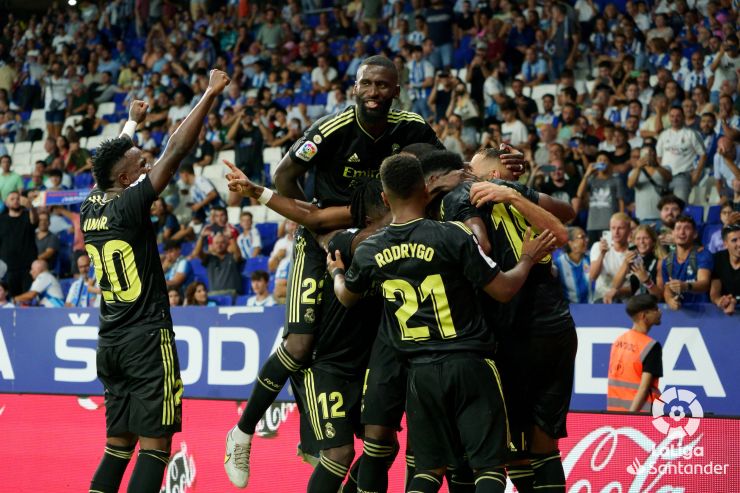 Five things we learned from Matchday 3 in LaLiga Santander

There were several interesting results on the third weekend of the new season, producing the following talking points.

Lewandowski is adapting quickly to his new surroundings

Robert Lewandowski has quickly shown that he is the closest thing to a guarantee of goals and he was at his ruthless best in FC Barcelona's 4-0 routing of Real Valladolid, scoring twice.

After drawing a blank in the season curtain raiser against Rayo Vallecano, he now has four goals in his last two games after his brace at Real Sociedad.

The 34-year-old has quickly endeared himself to the home fans, who already have a chant in his honour, and finishing top scorer in LaLiga Santander must already be among his objectives.

Casemiro's transfer to Manchester United broke up Real Madrid's long running midfield axis of the Brazilian, Toni Kroos and Luka Modrić, a triumvirate which spanned seven seasons. But, in the 3-1 win at RCD Espanyol, new arrival Aurélien Tchouaméni gleefully picked up the baton.

The Frenchman commanded Real Madrid's midfield with confidence and flair, laying on the pass for Vinícius to break the deadlock. Despite it being only his third start for his new club, he seems to have instantly struck up a strong understanding with his more seasoned partners in Kroos and Modrić, as well as compatriot Eduardo Camavinga when he came on.

Meanwhile, Modrić was given a standing ovation by the home fans when he was substituted, just as in the previous week away to RC Celta. There is a sense that even rival fans fear they could be soon bidding farewell to the Croatian puppet master and, while no one wants that day to come, Real Madrid’s midfield will still be in fine fettle with Tchouaméni as its heartbeat.

It may only be the early days of the season but Real Betis are in dreamland after winning their first three games, and so is Borja Iglesias, who has scored in all three of their victories.

The striker proved the difference in a finely balanced game with CA Osasuna by scoring the only goal in a moment of pure class which showcased both his footballing intelligence and ruthlessness. When Álex Moreno picked the ball up on the left wing, Iglesias resisted the urge to race to the centre of the box and instead drifted back, ushering his teammate to pass him the ball just inside the area and then unleashing a thunderous shot high into the net.

Only Lewandowski can match Iglesias’ count of four goals this season and, if he can sustain this remarkable form, he will be on track to surpass his personal best tally of 17 goals for RCD Espanyol in the 2018/19 campaign.

Iago Aspas is in unstoppable form and scored for the third game running to fire RC Celta to a valuable first win of the season away to Girona FC.

The Galicians have had their share of struggles over the last few years, but one thing has remained a constant: the sight of their talismanic striker scoring goals with remarkable frequency. Aspas has earned the Zarra award for the top scoring Spaniard in four of the last six seasons and, after making such a prolific start to this campaign, you would not want to bet against him winning it again.

Ramazani and Sadiq propel UD Almería to a comeback victory

UD Almería had waited seven years for a LaLiga Santander victory, but it was worth it as they enjoyed a hugely satisfactory win in an Andalusian derby against Sevilla FC, inspired by two familiar faces in Umar Sadiq and Largie Ramazani.

Ramazani, who began his youth career at Manchester United but finished his footballing education with UD Almería, scored his second goal of the season to cancel out Óliver Torres' opener, beating Bono with a precise finish.

Fellow attacker Sadiq, who helped propel UD Almería back to the top flight with 18 goals and nine assists last season, was the team's focal point throughout the game and it was fitting that he got the breakthrough goal.

Rubi's side know staying in the top flight will be anything but easy. However, with an attacking duo like Sadiq and Ramazani, they definitely have a chance.