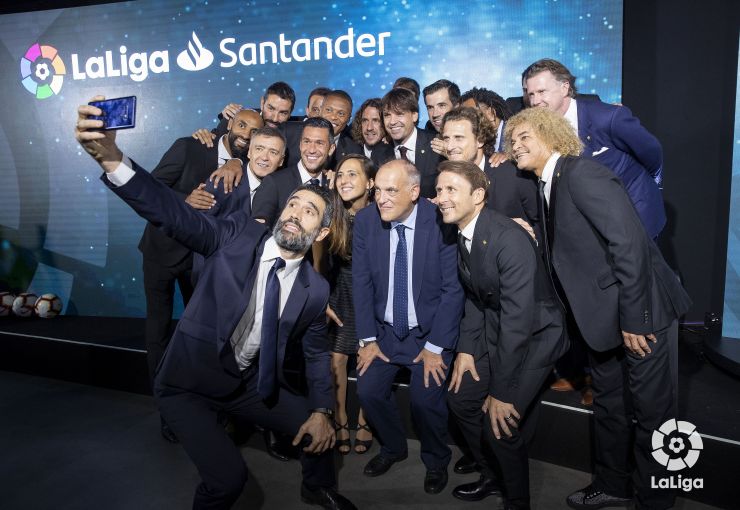 The former LaLiga stars will work on expanding the LaLiga brand in every corner of the globe.

For the fifth consecutive season, LaLiga has unveiled the former players who are set to work on the expansion of LaLiga's international brand throughout the world. Samuel Eto'o, Xabi Prieto, Julio Baptista, Luis Garcia, Aintzane Encinas and Carlos Valderrama are the newest additions to this season's #LaLigaAmbassadors squad, which was announced at a spectacular event.

The job performed by ambassadors is essential to LaLiga, as LaLiga president Javier Tebas explained: "The role of ambassador is fundamental to LaLiga's internationalisation process. They've all played here and know the values, perks and joy entrenched in this competition. Furthermore, their international profiles bring us knowledge and experience linked to other markets and are of immeasurable value to the LaLiga brand."

Samuel Eto'o has not hung up his boots just yet and is currently plying his trade for Qatar SC, the thirteenth club of his career. The striker notched 108 goals for FC Barcelona over five seasons at the Camp Nou, after spells at Real Madrid, CD Leganes, RCD Espanyol and RCD Mallorca.

Xabi Prieto is the perfect example of a one-club man, having devoted his entire 15-year career to Real Sociedad. He joined the Basque club as a youngster and went on to set the benchmark as first-team captain. The Spaniard is all too familiar with the core values showcased in LaLiga and at La Real.

Carlos Valderrama, one of the most legendary Colombian players of all time, played for R. Valladolid CF in 1991/92 and is known for oozing charisma. The playmaker spent the rest of his career playing in Colombia and the United States after leaving Spain.

Aintzane Encinas began her career at Añorga KKE before signing for La Real the following year, where she spent 13 seasons, most of which were in the top flight of the women's game. The striker also represented Spain Under-19s at the 2004 World Cup.

Julio Baptista was a key man for Sevilla FC, Malaga CF and Real Madrid, registering a total of 62 LaLiga goals and winning the league title once during his time in Spain. After spells at Cruzeiro and Orlando City SC, the Brazilian moved to Romanian outfit CFR Cluj in the summer and is hoping to get back among the goals.

Luis Garcia played for six different LaLiga sides, including Barcelona and Atletico Madrid, and also won the Champions League with Liverpool FC. By the end of the Spaniard's career, he had represented clubs in Greece, Mexico, India and Australia.