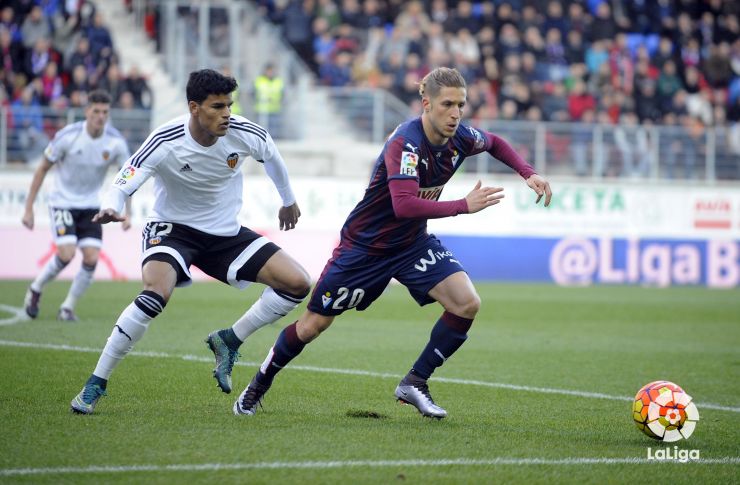 Ten-man Valencia come back to earn new coach Gary Neville a 1-1 draw at Eibar with a great performance from keeper Jaume Domenech, who saved a penalty.

It was a typically turbo-charged start from Eibar and they carved the first chance of the game after 13 minutes. Valencia keeper Domenech showed great reflexes to push Sergi Enrich’s point-blank shot onto the post but they continued to press.

The Basques, who have only lost to Real Madrid and Atletico Madrid in front of their own fans this season, swung in a steady supply of dangerous crosses while Valencia were restricted to rare counter-attacks.

Eibar were making a lot of progress down the right flank, and it paid dividends just before halftime. A freekick was worked into the feet of Ander Capa who raced into the area along the touchline and his low ball across the face of the goal was bundled in by Enrich.

Neville replaced Rodrigo de Paul with Pablo Piatti for the second half and the visitors improved without creating many chances, but they suffered a setback when defender Lucas Orban was sent off for leading with his arm into a challenge with Dani Garcia in the area.

Saul Berjon stepped up to take the penalty after 62 minutes only to be denied by Domenech with a superb save, and Borja Baston volleyed the follow up over the bar.

Neville took off a defender and threw Alvaro Negredo into the game and it paid off. The Spain striker turned his man after 85 minutes and fed the ball into the area, where Eibar defender David Junca turned the ball into his own net.

Eibar also finished with ten men when defender Ivan Ramis was sent off at the end and Paco Alcacer went close from the ensuing freekick.

After their Champions League exit to Olympique Lyon during the week Valencia's fightback will have lifted spirits at Mestalla, while Eibar will feel it was two points dropped.