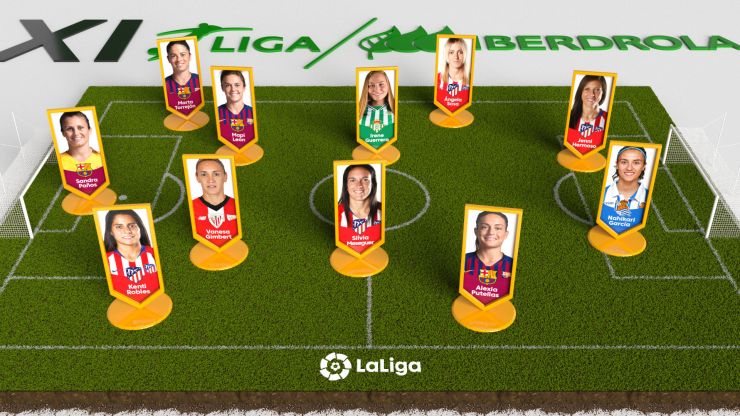 Once again, coaches and captains of Liga Iberdrola, on behalf of their clubs, have chosen the Best XI of the season.  Two clubs are predominant in the side, Atlético de Madrid and FC Barcelona, with four players from each – while great performances from Levante, Real Sociedad and Athletic have not gone unnoticed. In goals for this Best XI is Sandra Paños, with Barcelona having conceded the least amount of goals this season, just 19. The keeper from Alicante and Spanish international demonstrated her prowess between the posts all throughout the season. The experience and talent of Vanesa Gimbert (Athletic) and Mapi León (FC Barcelona) form the backbone of the team's defence, while fullbacks Kenti Robles (At. Madrid Femenino) and Marta Torrejón (FC Barcelona) provide cover on the flanks.

Alexia Putellas (FC Barcelona), Irene Guerrero (R. Betis), Silvia 'Mesi' Meseguer and Ángela Sosa (At. Madrid Femenino) form the XI’s midfield, striking a balance of raw talent youth. This season, the Spanish champions’ two midfielders have demonstrated their expertise in the middle of the pitch – and ‘Mesi’ has assumed the role of the Rojiblancas’ central compass.

Finally, the XI features a deluxe attacking duo, with Jenni Hermoso (At. Madrid Femenino) and Nahikari García – two of the season’s top scorers. Hermoso netted 24 goals this season, while Nahikari knocked in 16.