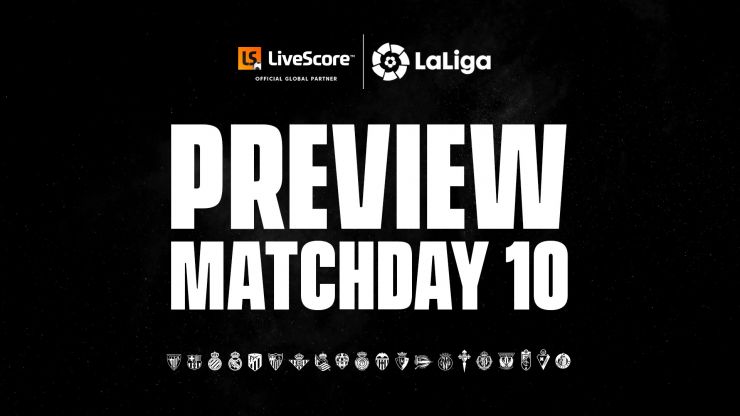 Atlético Madrid host Athletic at the Wanda Metropolitano, there is an Andalusian duel between Granada and Betis and Sevilla receive Getafe.

Atletico de Madrid’s early season stall continued last week with an uncharacteristic performance at home to Valencia FC. A first-half penalty for Diego Costa gave the home side the advantage but significantly less possession (43-57) saw Valencia FC hang in and chip away, eventually finding an equaliser thanks to Dani Parejo’s wonder free kick. It was Atletico de Madrid’s third-consecutive draw which has seen them drop three points off the league lead, something they held a month ago. Their opponents too are struggling after a hugely promising start as Athletic Club find themselves winless in their past four matches after too leading LaLiga Santander only a month ago. They’ve dropped to eighth as a result and have the unenviable task of heading to the Wanda Metropolitano desperately looking for points. The home side won both fixtures last year, with Atletico de Madrid winning their home fixture 3-2. Athletic Club haven’t beaten Atletico de Madrid away since 2011.

RC Celta’s miserable start to the season continued last weekend falling 2-0 to fellow strugglers D. Alaves, who leapfrogged their opponents in the process. RC Celta now sit just one place outside of the relegation zone, level on points with Real Betis but slightly ahead on goal differential. They appear locked in a battle for demotion, and their task gets no easier this week as they host a fly flying Real Sociedad who find themselves fourth after nine games. Real Sociedad snapped a two-game losing streak to thrash Real Betis 3-1 to restore order in San Sebastian. They’ll be confident of consolidating their current Champions League position against a side in poor form but will be wary of last year’s 3-1 loss to RC Celta at this venue. There has been just one draw in the last eight meetings.

Granada CF continue to be LaLiga Santander’s surprise team of the season with last match days narrow 1-0 win over Osasuna sending them into third place, an unthinkable reality a couple of months ago. They look every bit their position, having scored as many goals as Real Madrid and conceded the same as FC Barcelona, who they defeated on match day five. There’s no reason why their run shouldn’t continue as they host 18th place Real Betis, who despite boasting the competition’s top scorer, Lorenzo Jesus Moron Garcia, look a team that will struggle to retain top flight status. Real Betis have conceded a LaLiga Santander-worst 19 goals this season, five clear of last place Leganes who are winless. These sides last played in LaLiga Santander in the 2016/17 season, with Granada CF winning 4-1.

Sevilla FC’s irregular form continued last week, this time for the positive, with a 1-0 win over Levante. They have won two and lost two in their past four but still find themselves in the final European place. Their 0 goal differential is slightly alarming given their league position as they struggle to balance between attack and defence but their labouring opposition for Champions League and Europa League football are leaving room for error. They host a Getafe CF side on the up in recent weeks, winners of consecutive games for the first time this season and just one loss from their past five. Getafe CF dominated this fixture last year, winning both home and away, scoring five times and not conceding. This is not the same Getafe CF side as last year but they will feel buoyed by recent form.