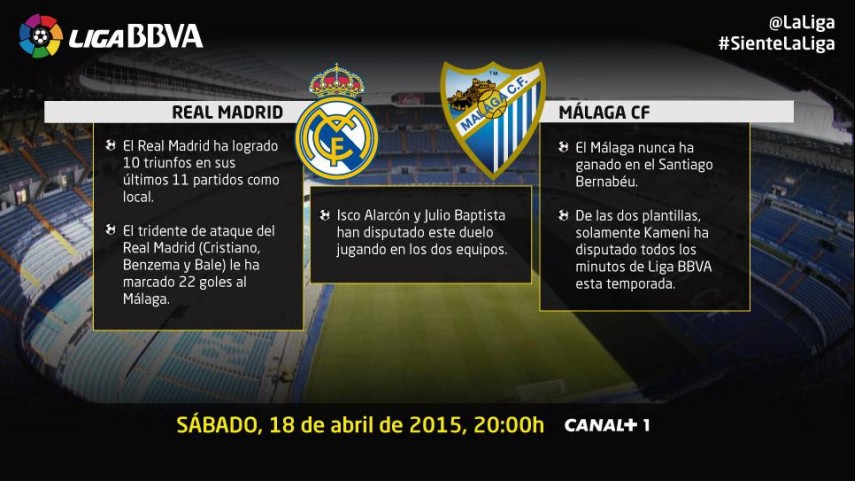 Málaga ready themselves to ransack the Bernabéu

The Andalusians will be looking to get their first away win against a Real Madrid side that could go top should FC Barcelona fail to beat Valencia.

Real Madrid and Málaga CF meet for matchday 32 of the Liga BBVA in what will be an important fixture for the home team. Los blancos have gotten back into their stride, having picked up three back-to-back wins in the championship, and enter the final stage of the season with their eyes firmly fixed on the title and on FC Barcelona's progress.

Meanwhile, Málaga are seventh and still in with a chance of clinching a UEFA Europa League spot, an aspiration for which putting more points on the board will play a vital role. The Andalusians have never triumphed in the Santiago Bernabéu and have not managed a win over Real Madrid in their last four attempts. As such, Javi Garcia's men will be looking to put an end to both of these bad runs in order to climb further up the Liga BBVA table.

Carlo Ancelotti will be without Karim Benzema, who has not been able to train properly since playing in Tuesday night’s UEFA Champions League encounter against Atlético Madrid. Málaga will have to make do without Weligton Robson who must serve a one-match ban after received a fifth yellow card last weekend. Egor Filipenko makes his way back into Javi Garcia’s squad.

Views from the dugouts

The Real Madrid manager spoke in glowing terms about the upcoming opponents and stated that his team are up "against very intense and dynamic side that have won in the Camp Nou. As such, we have to pour all our energy into this game". Elsewhere, Garcia talked about the quality los blancos possess: "In order to come away with anything we need to attack and defend well as well as have a bit of good luck on our side. We need a complete performance and for things to badly for them".