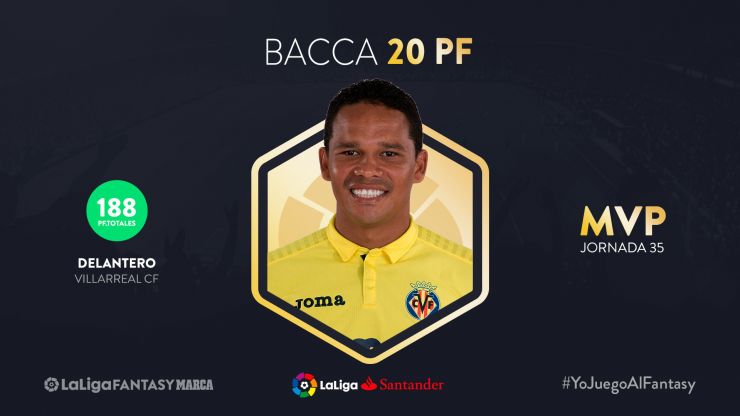 These are the 11 players who racked up the highest number of points on Matchday 35 of the 2017/18 league campaign.

With Matchday 35 of the LaLiga Santander season now done and dusted, it's time to take stock and reveal the LaLiga Fantasy MARCA Best XI following this latest round of games, in which Carlos Bacca was the standout performer.

The winner of LaLiga Santander 2017/18 has been decided, and as expected it's FC Barcelona, after they mathematically sealed the title in their 4-2 away victory over RC Deportivo. Along with SD Eibar and Villarreal CF, the Catalan giants have the most representatives in this Fantasy XI. Despite Barcelona grabbing the headlines, the Player of the Matchday is Villarreal's Carlos Bacca, who was the star of the show for his side in their win over RC Celta, netting a hat-trick.

Between the sticks in this XI is Yoel, who kept a clean sheet for Eibar away at Valencia. In his first appearance in almost a year, the 29-year-old played a key role in his side coming away from Mestalla with a draw, and his performance earned him 11 points. 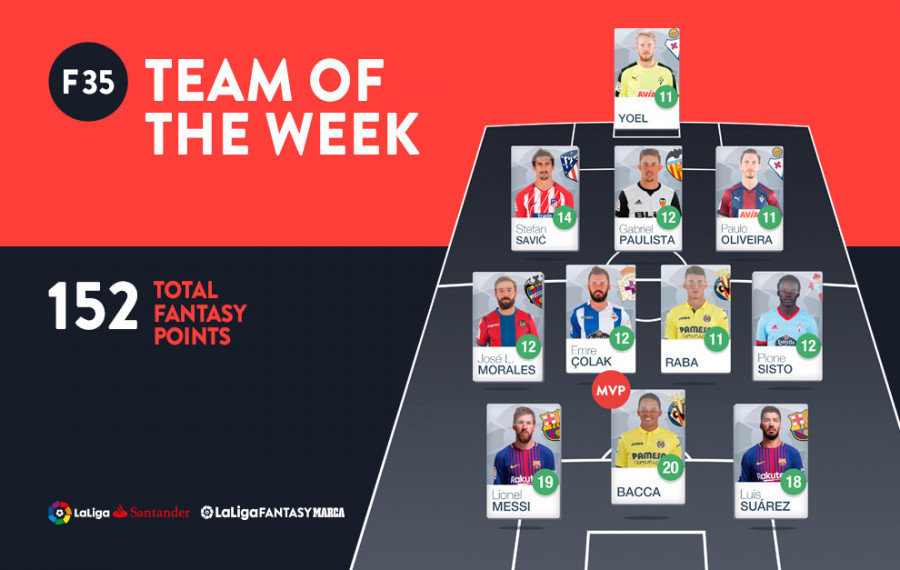 The defence consists of Stefan Savic, Gabriel Paulista and Paulo Oliveira, who scored 14, 12 and 11 points respectively. All three helped their sides keep clean sheets this matchday.

Levante UD, Deportivo, Villarreal and Celta players make up the midfield four in this XI. Jose Luis Morales was Levante's hero of the day, scoring the goal against Sevilla FC that kept his side in LaLiga Santander. Although Celta were beaten by Villarreal, their wing wizard Pione Sisto put in a decent performance, enough to earn him a place in this team. Fellow Galicians Deportivo are represented by Emre Çolak. The Turkish playmaker netted the equaliser for his side against Barcelona, and despite giving his all, his efforts were in vain as Deportivo fell to a defeat which sealed their relegation to the second tier of Spanish football. This trio all scored 12 points, while Villarreal's Dani Raba claimed 11, after setting up two goals in Villarreal's victory over Celta.

This attack-minded side is rounded off by three South Americans who shared six goals between them. Lionel Messi, who scored 19 points, was the undisputed star of the show for his team against Deportivo, after yet another hat-trick which helped Barcelona win their 25th league title. Fellow Blaugrana forward Luis Suarez played a big role in Messi's goals, setting up two of them, which saw him awarded 18 points. Aforementioned Player of the Matchday Carlos Bacca, who earned 20 points, completes this XI.

Awaken your inner coach by downloading the game, create a league with friends or sign up to the public leagues and get competing with other like-minded lovers of Spanish football. The game is available on mobile devices and tablets and can also be played online via Facebook.

For more information, visit http://laligafantasymarca.com and interact with the LaLiga Fantasy MARCA community on the game's official Facebook page and on Twitter @FantasyLaLiga. Use the hashtag #VuelveElFantasy to exchange views with other social media users and be part of the most exciting adventure of the season.

Don't have a LaLiga Fantasy MARCA team yet? Download the app: iOS or Android now.